​  Wiscasset and Bath are both deep-water tidewater ports; the former on the Sheepscot River, and the latter on the Kennebec River.  The time I want to represent is the early 20th Century when the shift from sail power to steam was in full swing, and the shipbuilding industry was the backbone of the area.
One of the practical advantages of modeling ports on a model railroad, is the ability to multiply the "industries" serviced by the railroad by simply changing what type of ship shows up at multiple-use docks.  For instance, the Town Landing at Bath could service small local producers of various products with LCL carloads of general freight headed for virtually any destination.  The bath Steamboat wharf provides connections with passenger trains throughout the day, as well as an unloading point for larger cargo boats and small ships with any type of cargo for transfer to the railroad, from newly made horse buggies to automobiles to steam donkey
engines or cotton bales or what have you.
Along with multiple use docks, you have bulk cargo docks such as those for unloading coal, oil, lumber, etc.
With deep water ports and the railroad being the main design elements for these modules, the search for appropriate ship models commenced.  There are several 1/87 scale ship models on the market.  There are more 1/96 scale (1/8" = 1') models available than 1/87, so most of the kits I found and purchased are 1/96 scale.  Another option is buying boats or ships in other scales, and converting the useable parts, such as the hull and deck, into something that is compatible with HO scale.
Above left is the fishing trawler Lady Smith.  This is a beautiful 1/90 scale kit.  At only 3/100 smaller than 1/87, this can be built as-is.
To the right is the Joseph Conrad.  This is a 1/88 scale kit, although it looks like it's much smaller at first look, because as far as square riggers go, this was a very "small" school ship.
​Above left are two schooner kits, the Benjamin and Harvey.  These are mass produced Chinese kits that are on eBay for anything from $5 to over $100, and marketed at anything from 1/45 to 1/120 scale.  Take your pick.  They're all the same kits, and measure out in actuality to about 1/96.  To the above right is the Model Shipways schooner Forster in 3/32"= 1'.  It's smaller than 1/96, and if you want to do the math, more power to you.  Changing the size of the deck houses and furniture will make it compatible with HO.
​To the left is the Model Shipways kit Harriet Lane in 1/144 scale.  I love the Harriet Lane, and love this perfect example of a transitional sail/paddle wheeler.  With new deck housing and fittings, it will make a fine smaller ship in the larger scale.  To the right are the Model Shipways Taurus in 1/87 scale and Bluejacket Shipcrafters Wendameen, also in 1/87. 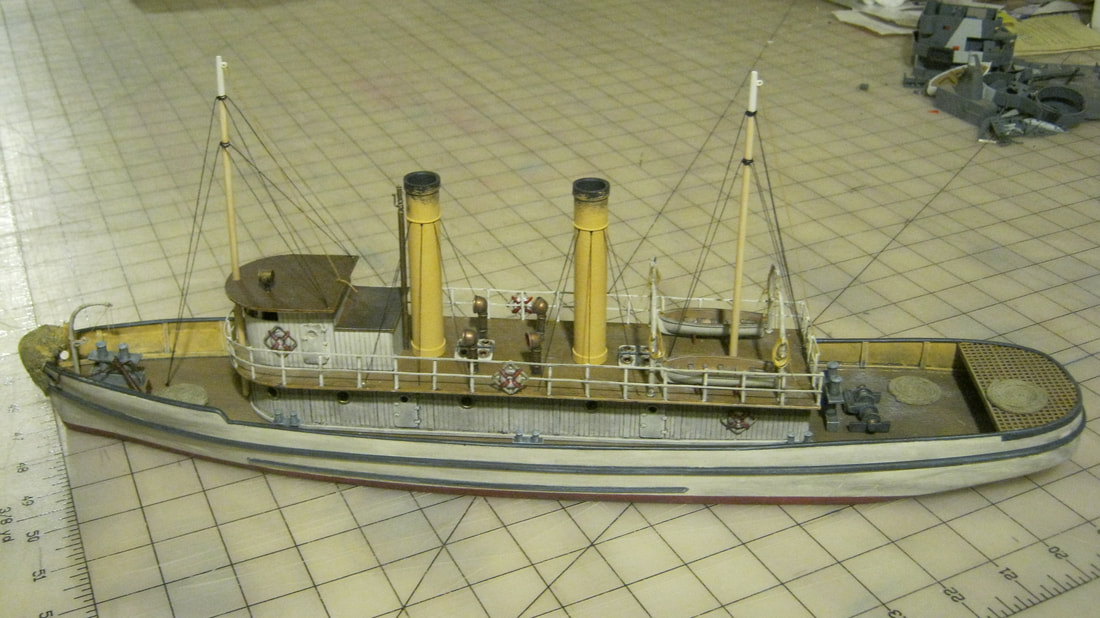 Ocean going tugs like this were built to move strings of barges up and down the east coast moving coal from mines of the Virginias to New England.  During the transition from sail to steam, the barges were often large schooners that had their sails, rigging and upper masts removed, and one of these tugs often pulled a string of three (or more) of these schooner barges behind it.
Above and below is the Seaport Model Works 53 foot Coastal Passenger Steam Ferry kit.  This kit is just too cool and says "Maine" all over it.  In early Maine, transport was more by water than roads, and a typical trip from somewhere like Augusta to somewhere like
Wiscasset would be done by boats like these moving up and down the rivers and along the coast.  It wasn't until the railroads expanded that travel across land became common in Maine. 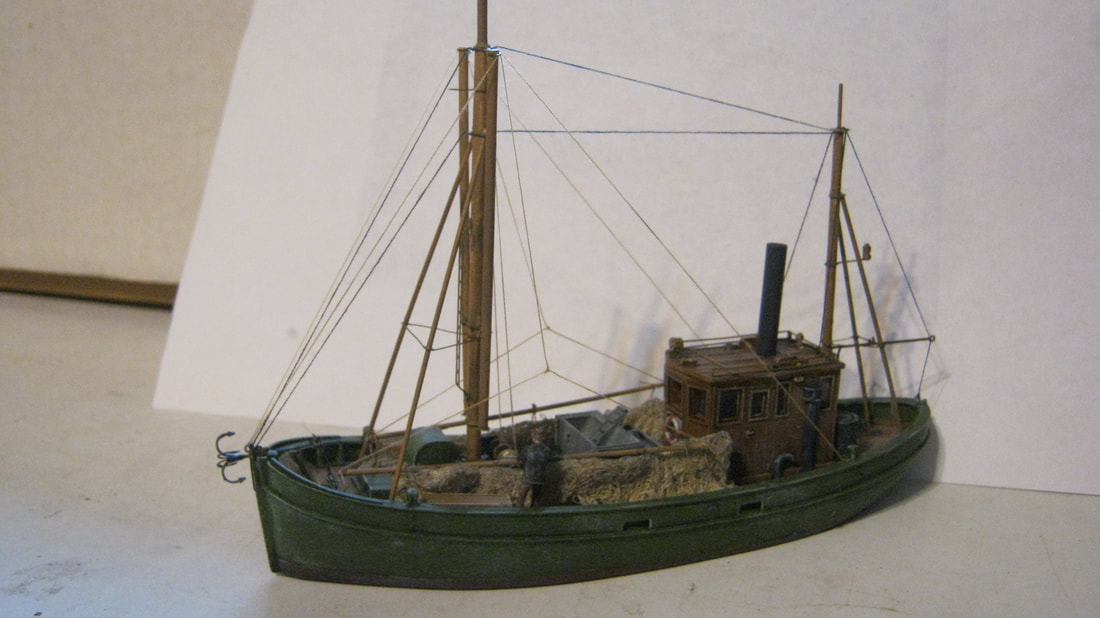 Above and below is Artitec's Crabbing Cutter waterline kit.  The only major modifications made to this kit were adding the steam funnel and improving the rigging a bit.  Many diesel powered boat kits can be converted to steam power simply by adding a funnel.
The above two and below three photos are of the Artitec Rhine River Barge "Helena" kit.  I wasn't sure about incorporating a modified Rhine barge into a small coastal oil tanker for New England, but after going back into my research materials and some Googling, I found several vessels along the Bath waterfront with the same types of deck houses and general design.  By leveling the sheer on the open hold of the kit to support the raised oil tank, adding some plumbing made from sprue, leftover hand wheels from F&C rolling stock kits, Evergreen plastic sheet, strips and tubing, Grandt Line nut/bolt/washer castings, and Central Valley ladders, a funnel to convert it to steam, and some 18 gauge wire for hose, I now have a pretty convincing coastal oil tanker.
For something to pump the oil into, I salvage and modified an old oil storage tank kit from when I was a kid (the one on the left), and added another one procured cheap on Ebay (the one on the right). 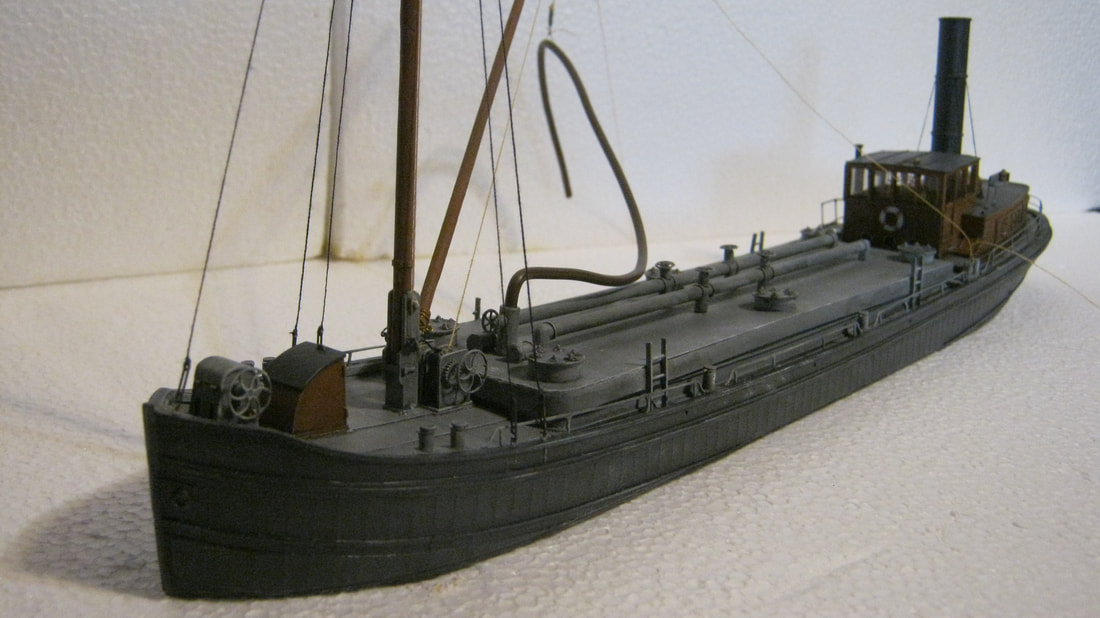 The schooner above and below is the schooner Wendameen kit shown at the top of this page.  This was a first, sad attempt at modeling furled sails, and was good learning kit to do it on.  Future furled sails will look better from the benefit of the experience gained on this one. 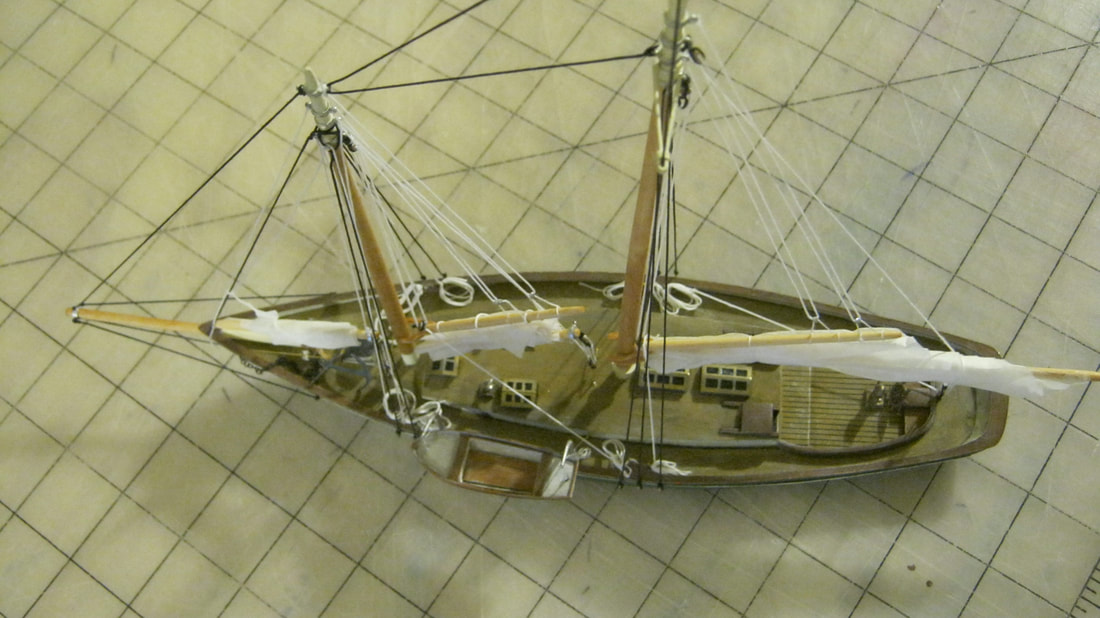 Below is the Seaport Model Works Steam Tug Exeter kit, With a few details I added, to improve a bit on some of the details included in the kit.
Below is the Frenchman River Model Works 68' Steam Freighter kit.  I wasn't really sure about this kit before I bought it, since the hull plates are VERY over-emphasized in the casting, and the pretty extreme freeboard, but after I finished it, the weathering some added details brought me around to liking it.
Above left and right and below left are Sylvan Scale Models "Tiverton".  The original was a lumber carrier, but it was common for ships built for one purpose to serve different purposes for different operators over their lifetime.  I left the cargo hold open, put a bottom in her with V-groove siding, and then cut off the tops and bottoms of oil barrels from the parts bin to put a partially unloaded cargo in her hold.  Since she's a waterline model, and there is only roughly 1/3" of space below the deck, painting the bottom of the hold dark helps create the impression the barrels are whole barrels in deep hold.  A cargo net with a load of barrels heading for the dock gives the impression of activity, and there will be crewmen with guy ropes leading the load and operating the winches and whatnot.
Above right and below left and right is Scientific Models Co. model schooner "Sharpshooter".  Through the 1800's and early 1900's, well past World War One, two-masted schooners were the mainstay of commercial traffic coming into and out of Maine's ports.  The most important traffic was with other ports along the east coast and traffic to and from the Caribbean islands.  Some of the most typical cargos were lumber products heading to the Caribbean, with molasses, sugar and fruit coming back to Maine.  This model has a deck load of molasses above that in the hold, and the model has been built heeling to starboard to give it a better impression of being under sail as it works its way up the Kennebec to Bath.  The rudder and tiller will be added later as they are the most fragile parts of the model.
Above left is the Lindberg models 'Jolly Roger' pirate ship kit, that I built years ago and has seen better days.  I was going to throw it out, and decided to convert it into a schooner barge.  Above right, the drastic stripping and modification of the hull has been done, and lower left, the newly refurbished hull has had all the preliminary work completed.  Below right the painting of the hull has been done, and it's ready for its new role.
Below left and right, it now has its deck and wheelhouse added, heavy towing bits added to the bow and stern, masts and boom added, along with a steam donkey for loading and unloading coal from its hold.  The hold has been sunk into the deck and real coat added, along with the crew getting dirty loading the coal bucket to transfer to the dock facility.
For good measure, emphasising that this old schooner has been turned into a barge and has ended its days of sailing glory, a good coating of algae and barnacles have been added below the waterline. 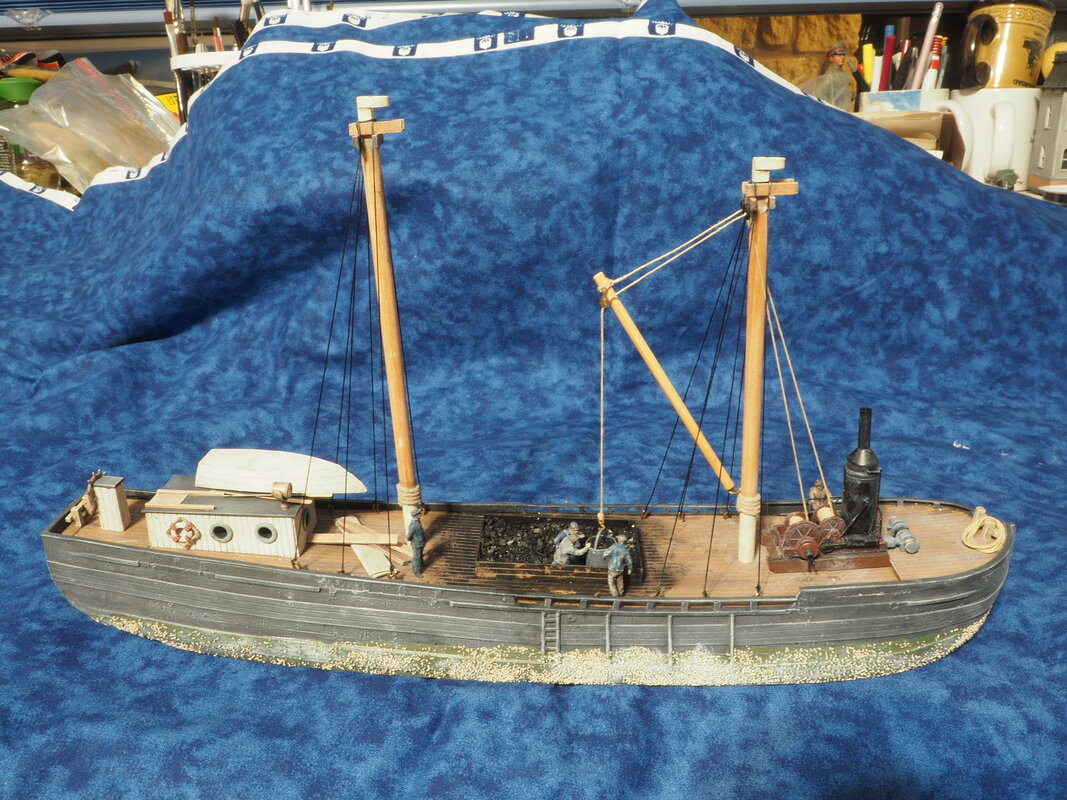 Above and below is the Model Shipways 1/8"=1' scale kit of the Phantom, a New York pilot boat.  I've fitted it out as a lumber schooner, with the fore lifted out of the way for loading or unloading, whichever I may need for rail operations at the moment.  It's a solid full hull kit cut down to waterline.
Above and below left is a Friendship sloop, named after the town of Friendship, Maine, where they were originally built.  Before the age of the internal combustion engine, the Friendship was the preferred vessel of lobstermen on the coast of Maine.  I've named my lobsterman in the boat Sam, in honor of my friend Sam whom is still lobstering to this day.
Above right and below is the Seaport Model Works HO scale workboat/lighter kit.  A lighter is akin to conveyor belt, as its job is to ferry cargo from deep water vessels to shore or vice versa.
Above and below is a lobster smack, that I converted to HO from a small scale model of the Charles W. Morgan whaling bark.  It was either the trash or convert it to something useful for the Franklin & Bath RR docks.  A smack is a boat whose hold has the bulkheads sealed watertight, and holes are drilled through the hull for water to flow through to create a live-well for either lobsters or fish.