As rare as locomotives are for Maine narrow gauge in HOn30, luckily there are many good rolling stock kits currently (as of 2020) being manufactured, and out of production kits show up on Ebay fairly often, as in several times a year.
The vast majority of my rolling stock comes from Funaro and Camerlengo.  They are multi-media craftsman kits, and they make several types of cars and cabooses for both the Sandy River & Rangeley Lakes Railroad, and the Bridgeton & Saco River Railroad.
Another company currently making excellent multi-media craftsman kits for the Maine two-footers in HOn30 is Mount Blue Model Company, that makes several types of box, flat, work, caboose, cream, and reefer cars for the SR&RL, the Wiscasset, Waterville & Farmington Railroad, and the Kennebec Central Railroad.
There are several out of production companies that made both freight and passenger cars for the Maine two footers, in materials from everything from balsa to brass to resin to vinyl.  These are the ones that you'll have to have patience for while searching on Ebay to find them.
Some of these manufacturers are Sango, Chivers Finelines, Polymold, Sandy River Car Shops, Chris Cardinal, David M. Hoffmann and others.
Other manufacturers that make prototype rolling stock in HOn30 for the Maine two footers, as well as non-prototype, but are suitable and will look right at home on a Maine 2 Foot layout, are Marsh Creek, Railway Recollections, and a few others.

This page is a work in progress, so you might want to check back once in a while.
​ 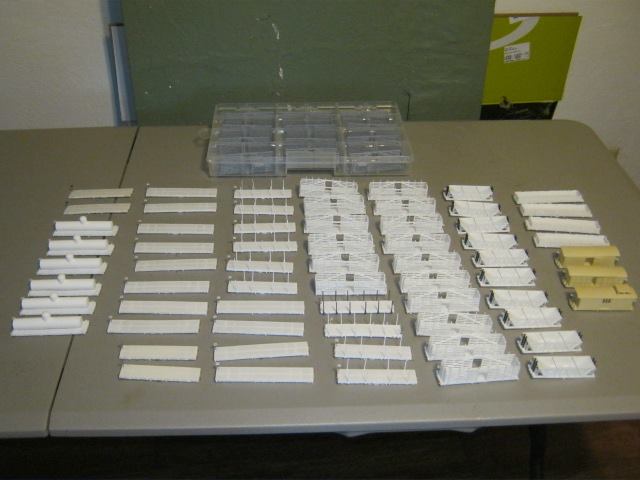 Above and below are pictured a run of kits that I mass-assembled.  All of them are Funaro & Camerlengo except for the three tan/yellow cars on the right.  Those are from Railway Recollections.  They F&C kits are Bridgton & Saco River RR tank cars and flats, SR&RL RR flats, pulp racks and gondolas, and Billmeyer Smalls coal hoppers.  The Railway Recollection kits are early Sandy River Railroad cars and a caboose that were converted by the Sandy River Railroad from rolling stock purchased from the bankrupt Billerica & Bedford RR.  Most of them are built stock right out of the box, and some I have added more detail to. 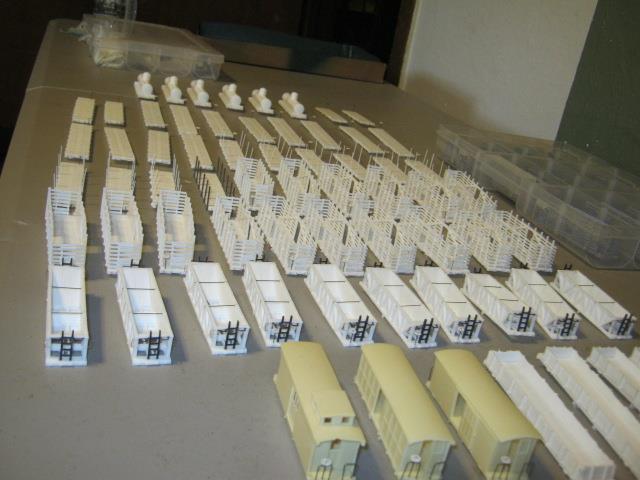 The above two photos and below left photo are a failed attempt to make a mass-produced load for my large fleet of pulp racks.  I put a cardboard liner inside a pulp rack as a spacer, and then built a load of pulp wood inside by carefully gluing the logs inside the spacer in the car.  I then removed the load after it was dry, and made a latex mold of it.  Although the mold came out alright, the resulting resin casting was unacceptably heavy.  HOn30 forneys aren't very powerful, so I switched to making individual loads from balsa dowels for each car, which are MUCH lighter.  Below right is a batch of pulp racks getting their primer coat before painting.  Resin kits need to be cleaned well with detergent or Goo Gone and a brush before priming and paint or the paint will easily rub and flake off the resin.
Below, a batch of pulp racks has been painted and weathered, and is now ready for decals.  After the decals, trucks and couplers will be added, and half of them will have loads of pulpwood installed for the trip 'south', and half will remain empty for the trip 'north'. 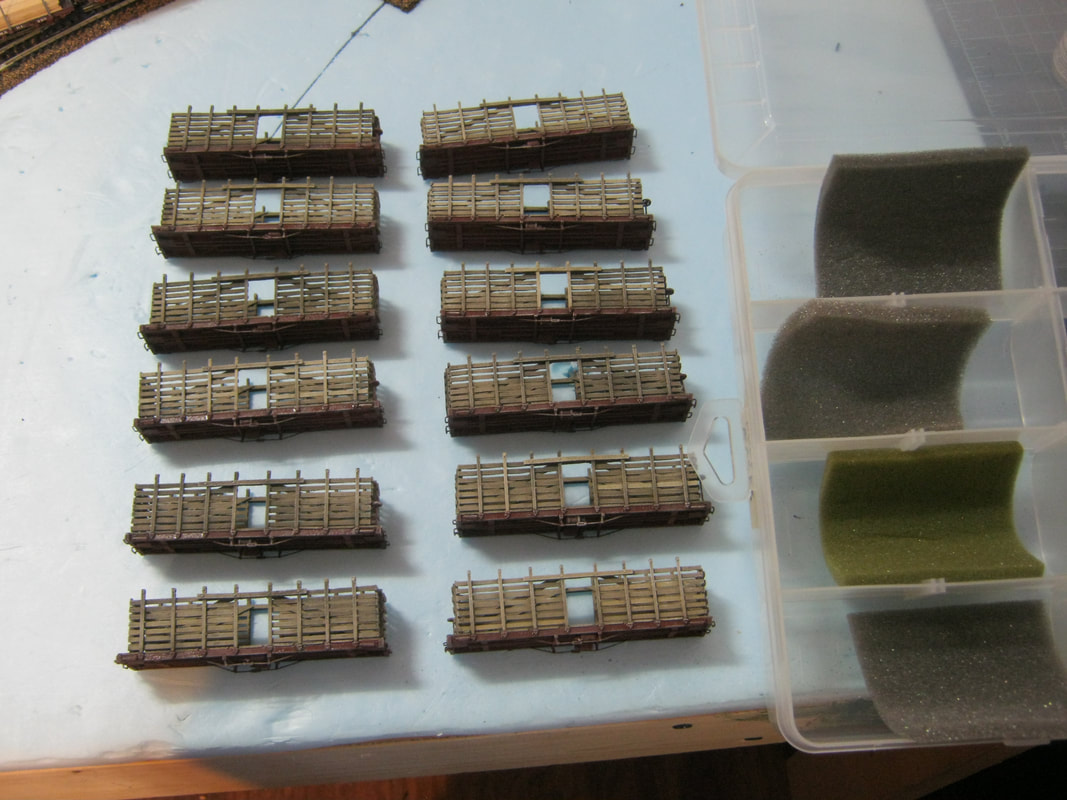 Funaro & Camerlengo kits make up by far the majority of my rolling stock fleet.  For freight cars, each box contains two cars, for their SR&RL box cars, flat cars and gondolas.  They make a couple of different types for each.  They also offer SR&RL cabooses, as well as rolling stock kits for other Maine 2-footer railroads.
The instructions are rather vague, and it took me quite a while to do the research in books by Jerry DeVos and Gary Kohler to make sure I was making them right.  Several of my cars from my early attempts have mistakes built in.  It is what it is.
Although the kits come with all the necessary plumbing for the brake lines and bars and whatnot, I have only made kit with all the brake components.  It is a royal pain in the ass to do, and unless you're entering a car in a competition, no-one is ever going to see the underside of your cars.  You can't see any of it from a side view sitting on the track, and I would literally have to pick up each and every one of my box cars to figure out which one has the full brakes.
A bonus with F&C kits is that the decal sheets have several redundant decals per sheet.  If you mess one up, there are plenty more, but even better, you can use them on other manufacturer's kits that don't come with decals, or use them on scratch built rolling stock.
If you are building a small layout, you'll only need a limited amount of rolling stock.  But if you're building a large layout, and plan to conduct realistic operating sessions, F&C kits are the most cost effective way to build up a large fleet of rolling stock.
The distributor for these kits is loco-motive-hobbies on Ebay.

Mount Blue Models are beautiful kits!  They make several SR&RL freight cars.  One of the advantages with Mount Blue kits that their kits come with interior detail and doors that can be left open or closed.  Leaving them open is a great option, so that you can see that interior.  These are available direct from the manufacturer at mountbluemodelco.com

Sandy River Car Shops kits are out of production.  You find them on Ebay.  They made several rolling stock kits, and this is a typical kit of an SR&RL box car.  The instructions are pictured above right, which include a diagram of the underside of the frame with brake gear, and a drawing of the car itself in three views.  The written instructions are basic, and like the F&C kits, you have to either do some referencing from books to figure out on your own how to make the kit along with the instructions, or have prior experience building rolling stock kits.
Above left are the kit components laid out, which include bass wood and balsa for the body and frame, wire for making the brake plumbing, grab rails, and brake wheel shaft, tin foil for the roofing, fishing line for the truss rods, and plastic components for the stirrups, turnbuckles, brake reservoir and cylinder, nut/washers, brake wheel, etc.  The above right photo shows the roof block that is pre-shaped for the correct pitch for the roof.
Below is a close-up detail of the various plastic parts. 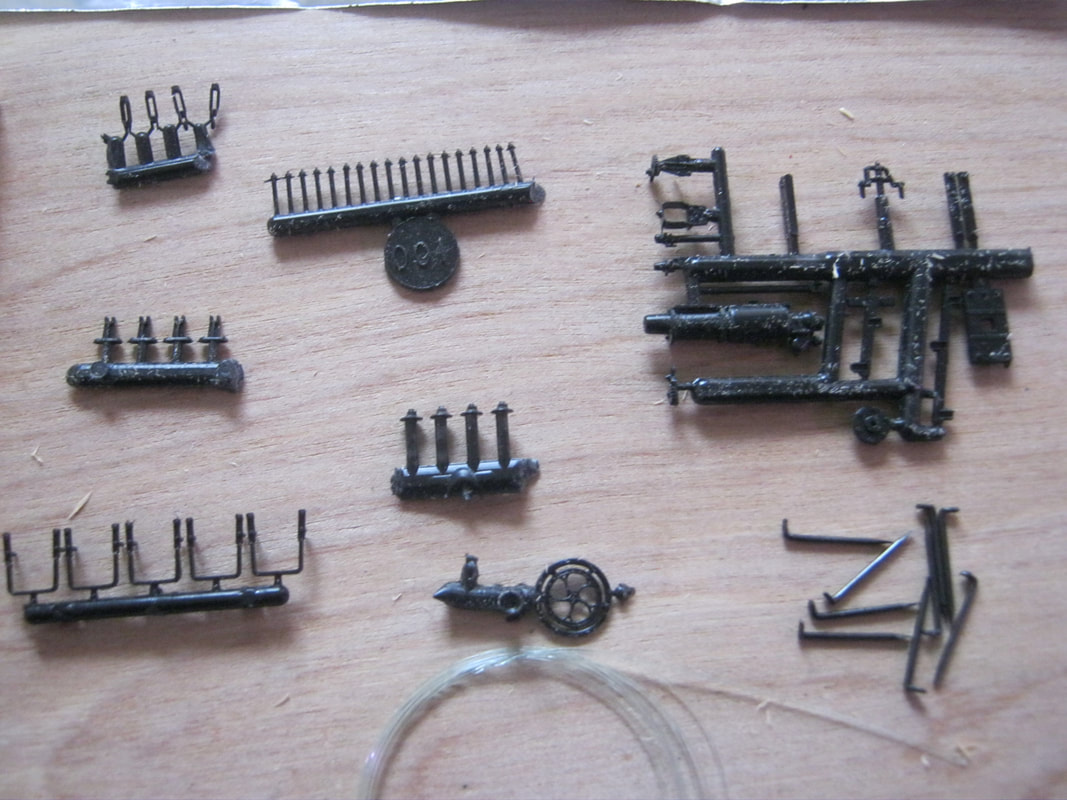 Poly Mold kits are early epoxy resin kits.  They are also out of production and you find them on Ebay.  Since they are such a basic kit, the instructions are adequate for assembly, since there is basically nothing in the kit requiring research or prior knowledge to figure out 'where it goes'.
Below is the adhesive that comes with the kit.  These kits are OLD, so the few that I've purchased, the vinyl emulsion adhesive that comes with the kit are all now a solid block filled with bubbles, as seen below right.
Below left are the kit components as they come in the box, in plastic pockets.  Below right are all of the kit components laid out.  They gray-ish object on the right below the brake wheel is a white-metal weight for ballast.  The kit is heavy enough on its own to not need it, but that's up to you.

Chivers kits are also out of production and found on Ebay.  This is their high-sided gondola kit, and they make other rolling stock kits as well.  As of this writing, I believe that the son of the original company founder may be re-issuing some of the Chivers kits at some point.  I have read a posting of his stating such, but haven't followed up on it lately.  The kit is injection molded styrene, with some brass and white-metal details, machine screws for the trucks, fishing line for the truss rods, and what appear to be wheel sets from NorthWest ShortLine.  The instruction sheet is adequate to figure out what goes where, and the styrene parts are very crisply molded without a lot of flash or imperfections.  The white metal brake cylinder and reservoir are a nice break from cleaning up roughly cast resin brake cylinders and reservoirs from F&C kits.

PGP kits were made by Paul G. Petrineli.  They are also out of production.  This is the only PGP kit I've seen that has shown up on Ebay, so I of course had to have it.
The instructions are four pages long, very detailed, and a breath of fresh air from the instruction sheets from some other manufacturers.  As you can see, there are many measurements in the instructions for placement not only of parts, but for the decals as well.
Below right are the components as they come straight out of the box.  They yellow envelop contained the decal sheet, which I have removed from the envelop and laid on top of it for the photo.  The frame is built from the included balsa, the grab irons are pre-formed wire, and the truss rods are made from wire instead of the typical fishing line.
Below left and right is the box car body, straight out of the box, shown from above and below.  It is one sold cast resin block, and is fairly heavy for HOn30 rolling stock.  It's probably a good thing I've only found one of these, as moving a cut of these around a yard with a forney would probably only sit in place with the loco drivers spinning out.
The decals are basic, so if you want to add the reporting marks and car data to it, you'll need to scrounge some out of your extras from F&C kits.  The plastic components look to be Grandt Line.

Railway recollections pruduces resin kits.  They offer a variety of kits of both prototype and freelance kits.  Below are two of their kits that were originally Billerica & Bedford cars that were purchased by the new Sandy River Railroad.  Eventually they both became maintenance of way cars for the SR&RL.

This is a Chris Cardinal out of production resin kit.  Rare for kits, it includes a set of what appear to be Grandt Line trucks and wheel sets.  A big bonus for this one is that it includes the very distinctive Turner Centre Dairying Ass'n decals.  Many of the older kits don't include decals, as you'll see in the next kit.  No written instructions with this kit, just the line drawings and the photocopied photographs page below right.

This is an out of production wooden kit.  It doesn't have separate doors, they have to be fashioned into the scored 'car siding' sheets of wood, so I'll be interested to see how distinctive the doors look after the car is done.  And...NO decals.  Harumph.