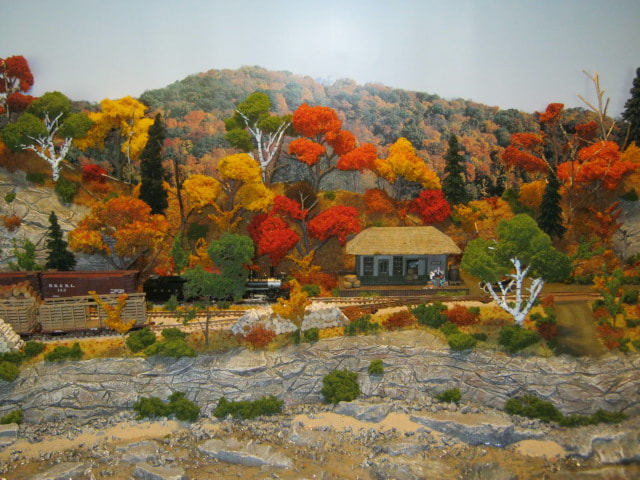 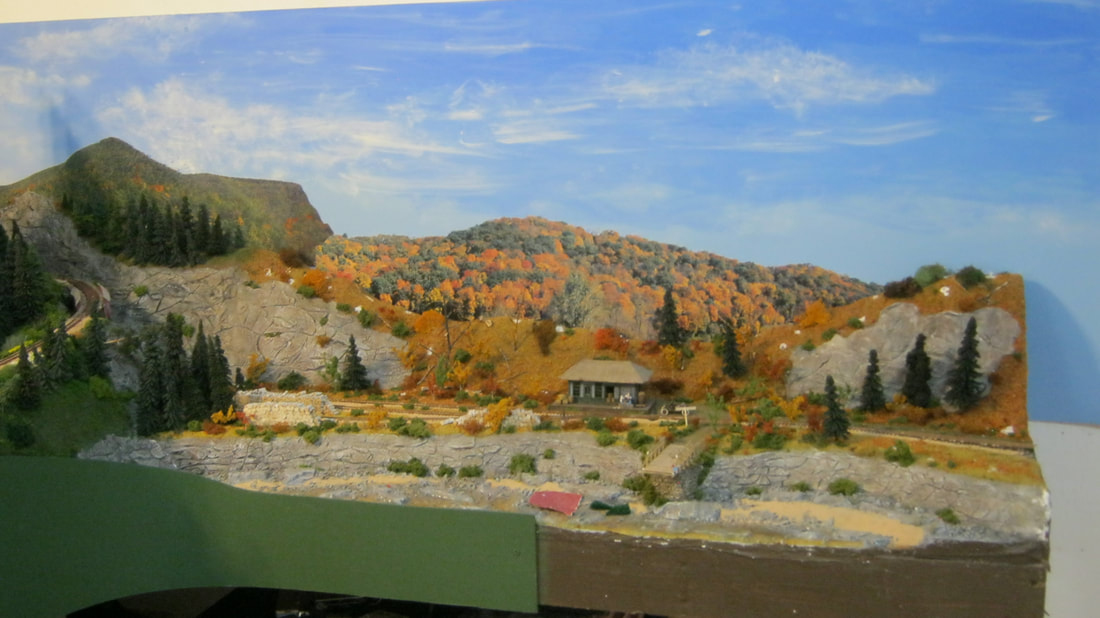 Above, two years and nine months after the previous photos were taken, Reeds, the first module I built, is finally being integrated into the rest of the layout.  After finishing up Sluice Hill to the left, which blended into the left side of the Reeds module, most of the original trees I made were pulled out to make room for a new group of trees.  Reeds will be a transition between the summer foliage of Sluice Hill and the full-blown colorful fall foliage of the Phillips module.
The photographic sky on the back drop was cut off along the top of the trees, and the photographic trees were glued onto the painted sky on the masonite.  When I first put the two photo backdrops together, I wasn't happy with the trimming of the hill I had done to the left, being too steep, so I trimmed more of that prominent angle away that you see above to round it off more. 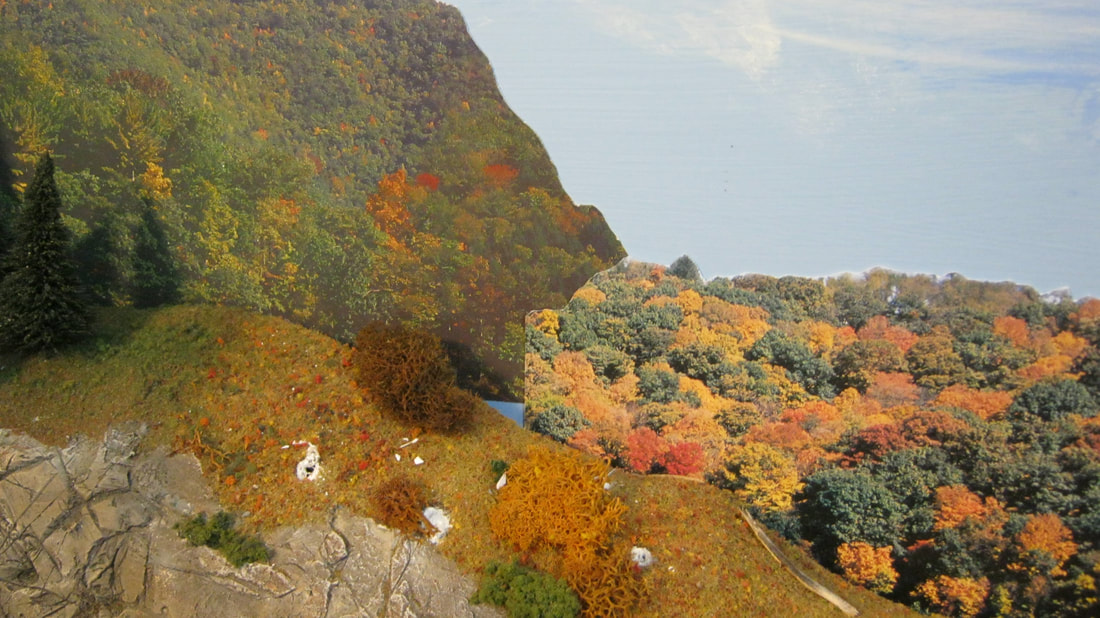 Above, the two photographic hills have been blended together, and the joint will be hidden behind the 3D trees and undergrowth in front of it. 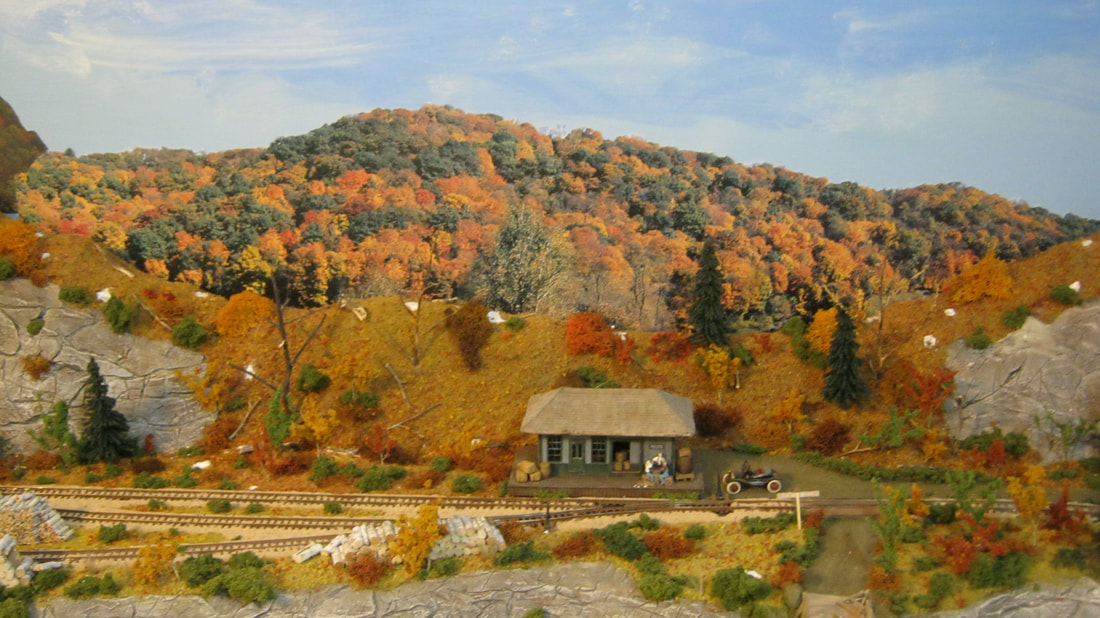 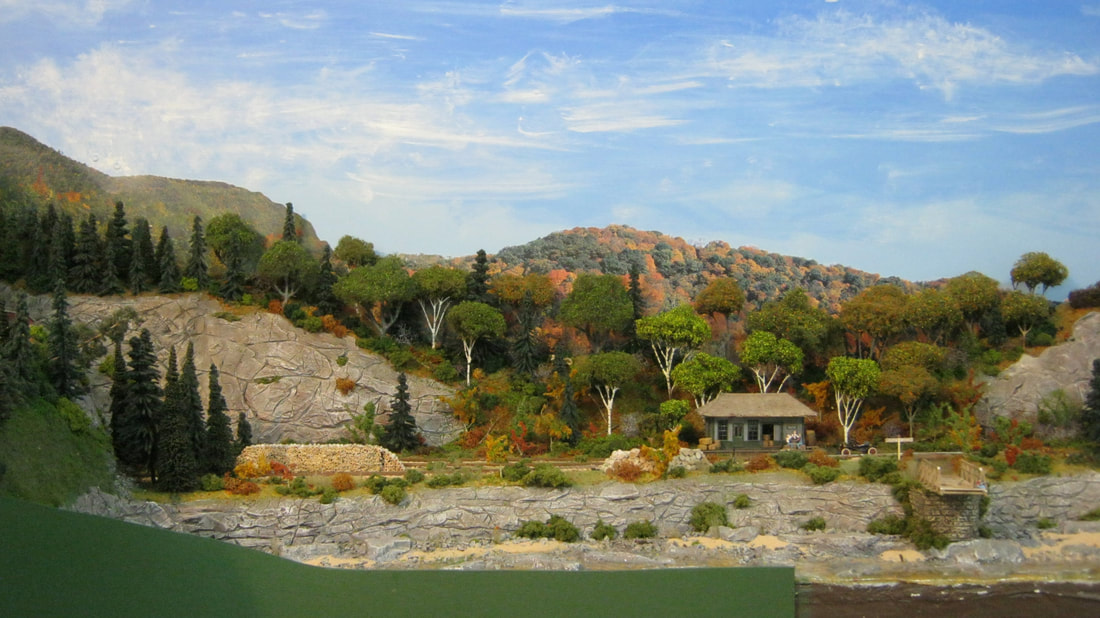 Above, although not completed, which won't happen until the scenery to the right of the Reeds module is in place, the majority of the new foliage is done.  The hill to the left in the background is now more rounded to look like a more natural topography, and the small patches of brown/tan/orange foliage on the left photo hill is a good transition to the right photo hill, that is mostly green with a mix of yellow, orange and red foliage, part way through the transition from summer to fall.
The 3D foliage in front now transitions from green to the left, to a light mixing of mostly green, with some yellow and orange starting to show up in the middle, and gradually adding more yellow and orange to the right. 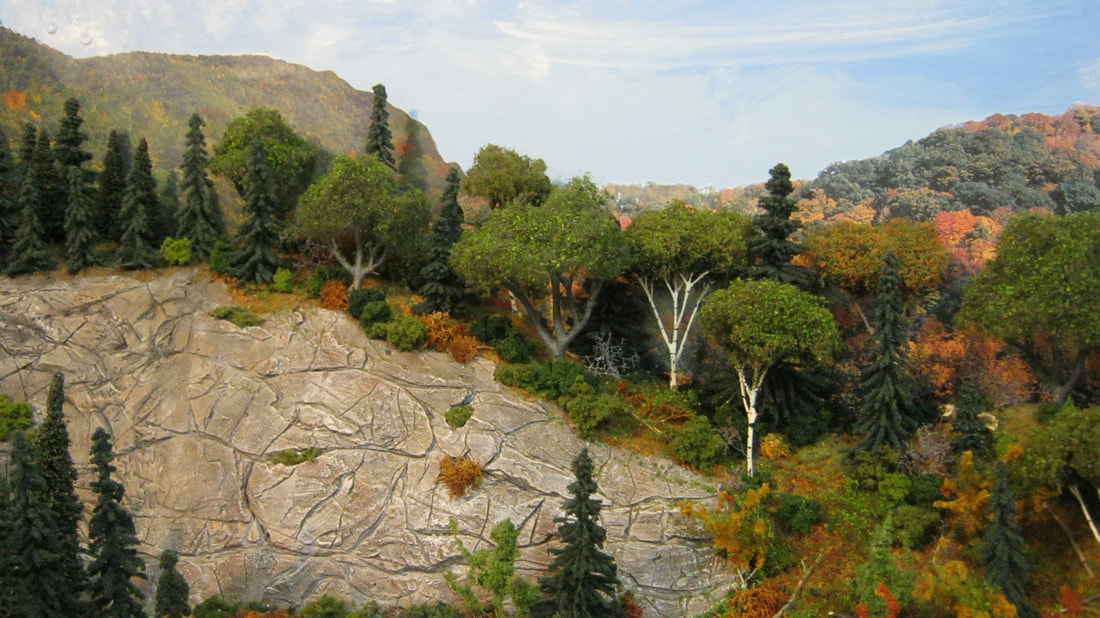 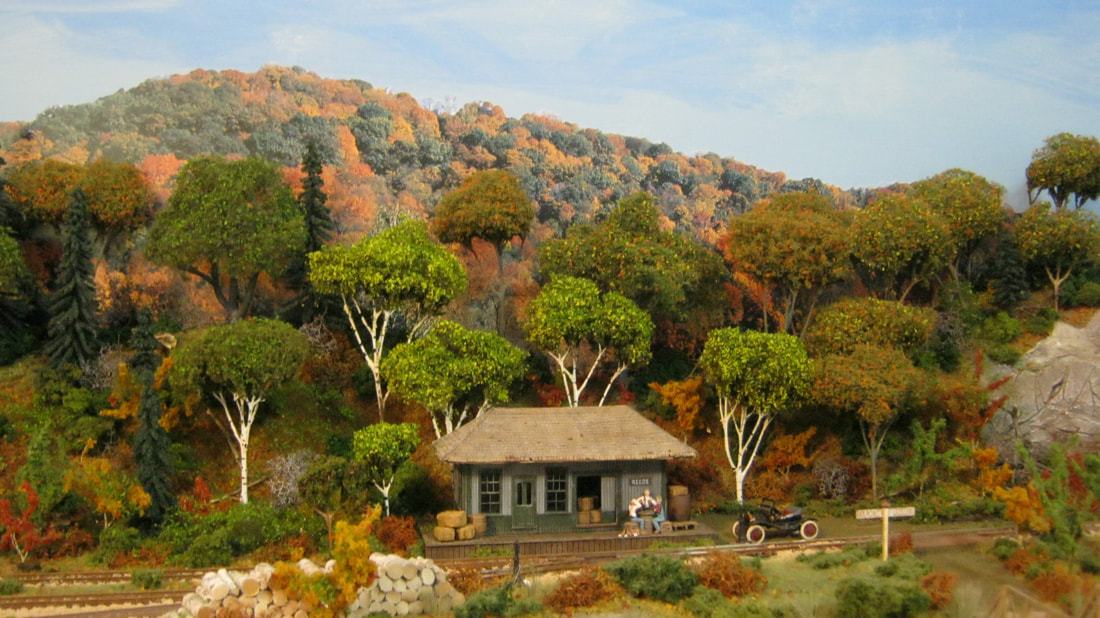 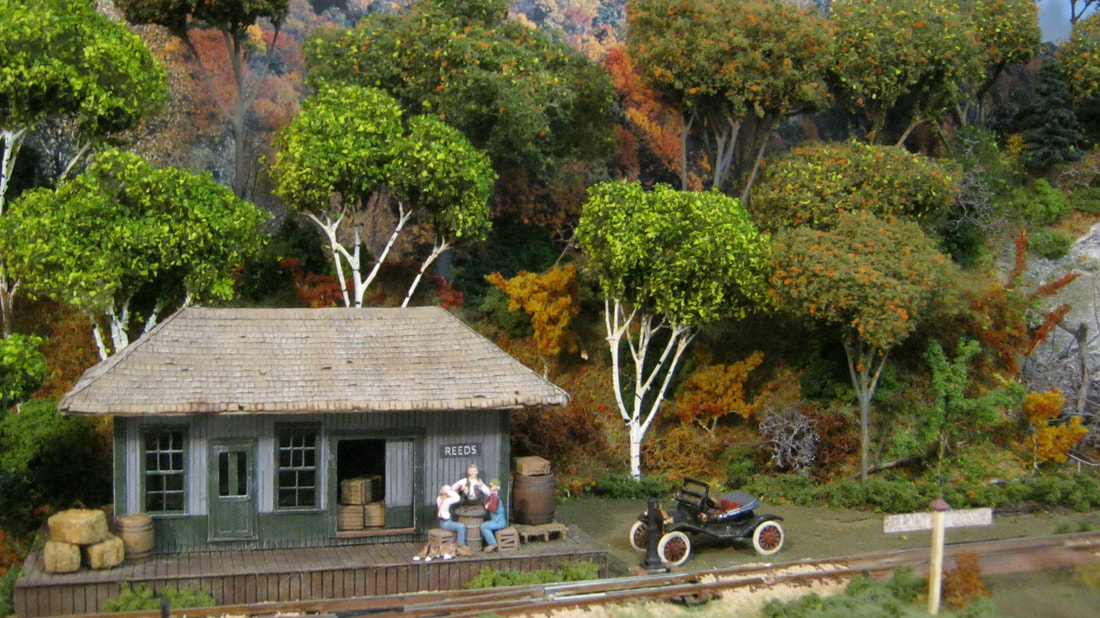 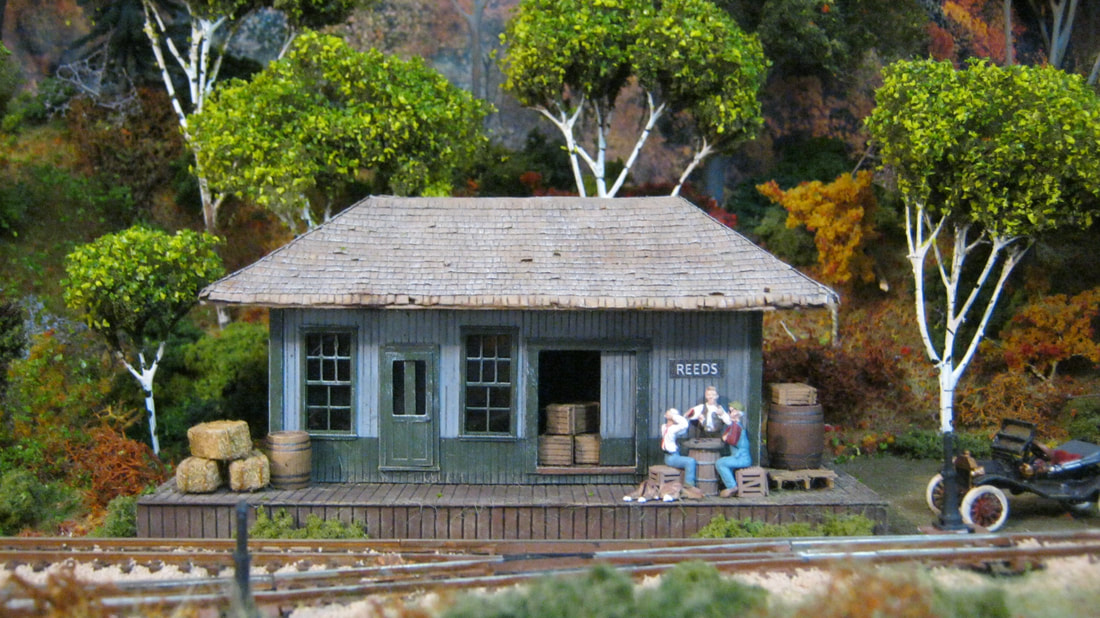 Below, the backdrop for Phillips, with its beautiful fall colors, is taped up just to eyeball the next steps in expanding the layout to the right beyond Reeds.  I'll explain the plan for that on the Phillips page.  For now, here for Reeds, the next step will be blending the 3D scenery of Reeds around that empty corner to naturally transition with the scenery for Phillips. 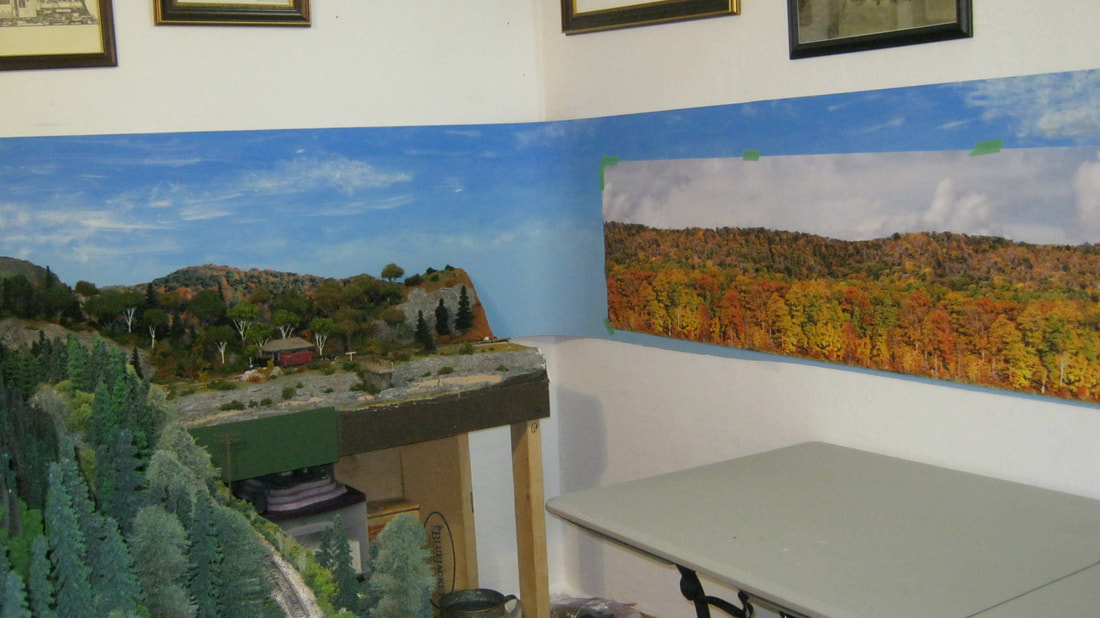