Prior to the consolidation of the preceding independent railroads into the Sandy River and Rangeley Lakes Railroad, The Eustis Railroad linked up with the Sandy River Railroad at what became known as Eustis Junction.  The main line rails at Eustis junction heading north from Phillips split and headed west to Rangeley, and north to Langtown, Green's Farm, and all other points north.  It performs the same historic function on my layout, linking both Rangeley and Langtown to each other and all points south.  It is the only wye on the layout, and is large enough to turn small train consists, along with a siding/passing track on the east leg of the wye, as had the original.  Small trains of lumber from the mill in Rangeley and trains of pulp and long lumber logs from Langtown and Green's Farm can be joined up for the trip south here, as well as long consists of empties split up here to go their separate ways back to Rangeley, Langtown and Green's Farm. 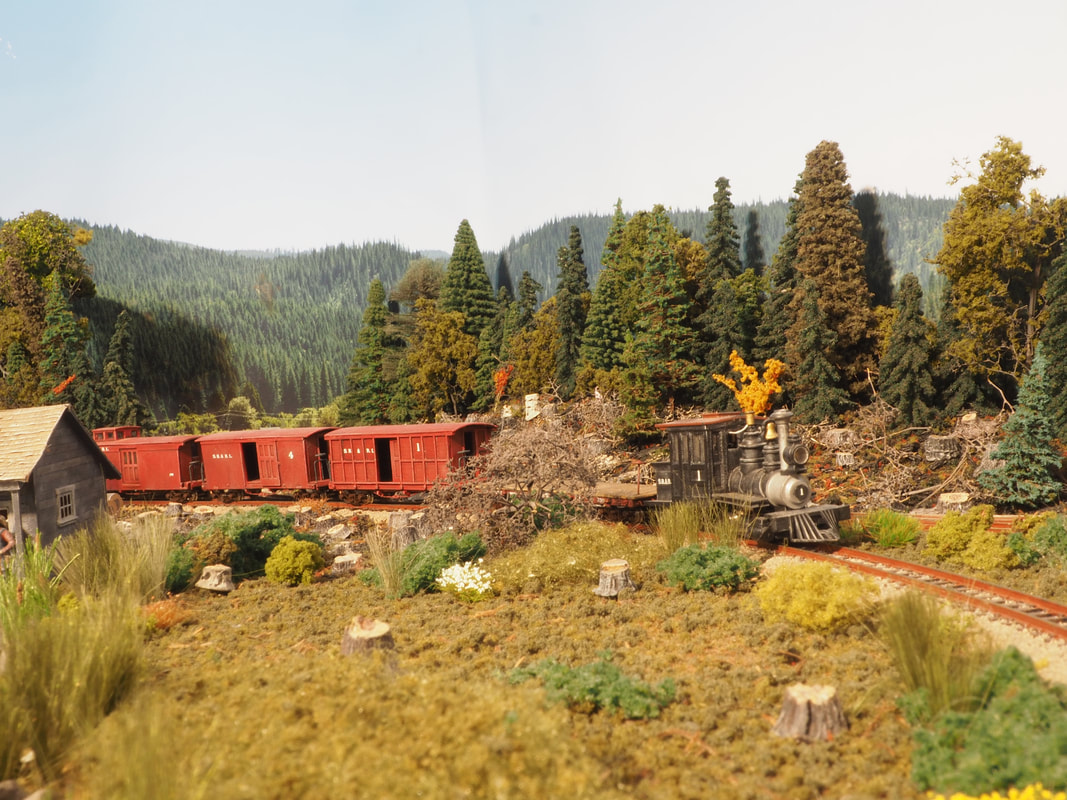 Transfering the planned curves and turnouts from the butcher paper plan onto the sealed/painted plaster cloth surface and then laying the cork roadbed above, and eyeballing in the photo backdrop gives me a much better idea of what can fit into the space available for scenery and structures, and how to blend the backdrop with the 3-D scenery.  As you can see above right, there will be a lot of water around Eustis Junction.  It was a marshy area, and at times flooded during the Spring freshets.  To add more logging activity into the area, the end of Hailey pond toward the wye will have logs floating in it, the flume delivering logs into the pond, and the spar tree stacking logs for loading onto flat cars.
Above, the rough ponds are cut in, with my habitual blue just to seal the ponds and give a better visual for future scenery work.  I lay the turnouts first, after they've been tuned according to "Make it Run Like a Dream", and after the glue holding them down has thoroughly dried, then I lay the flex track in between them.  I've found by trial and error this works best, because the slightest twisting of the ties of a turnout can prevent the points from operating correctly.  Switch machines are then mounted under the table under the turnouts.  To proof the trackwork, I take one of my flawlessly running locos, and run it back and forth through the trackwork.  Any joint or spot between the rails that makes the loco stutter or jump is filed down until the loco runs smoothly through it.  Once the track has been proofed, then I can continue the scenery work.
When you look at the backdrop in the above left photo, you'll see that the as the mountain starting at the left of the photo moves toward the right, there's an abrupt change in the mountains and you can see the joint between the photos where one backdrop ends and another begins.  I hadn't anticipated having to order the backdrop long enough to transition past Eustis Junction to blend with the Sluice Hill and Reed's Station modules behind the Rangeley module.  I had a 3' long mountain backdrop that I was going to use on a third practice module, before I decided to dive straight into the Rangeley module.  In one of my better coffee drinking pondering moments trying to solve the gap problem, I realized if I could blend the sky, I could use 3' backdrop to make the transition.
If you look in the photo above right, you'll see I had already painted the sky on the backdrop for Sluice hill, and liked how it came out.
If you look in the above left photo, where the mountain photo to the left stops, the rest of that rectangle of the sky was bare Masonite to the right.  I busted out a piece of cardboard for a pallet, and then painted the bare Masonite to match the sky over Sluice hill, and then painted over part of the photo sky behind Eustis Junction to blend the photo with the painted clouds.  It came out pretty convincing and you can't see the joint where the photo ends.  I then cut the photo sky from the 3' mountain photo, and simply attached it to the painted sky Masonite.  The joint between the two mountains will be blended with 3D scenery to make it disappear.
By divine providence, you'll see that the trees on the 3'mountain photo are starting to turn colors.  This, just by luck, works perfect to start the transition from the Summer scenery at Rangeley and Sluice hill to the Fall scenery at Reed's station, which you can see to the right side in the above right photo. 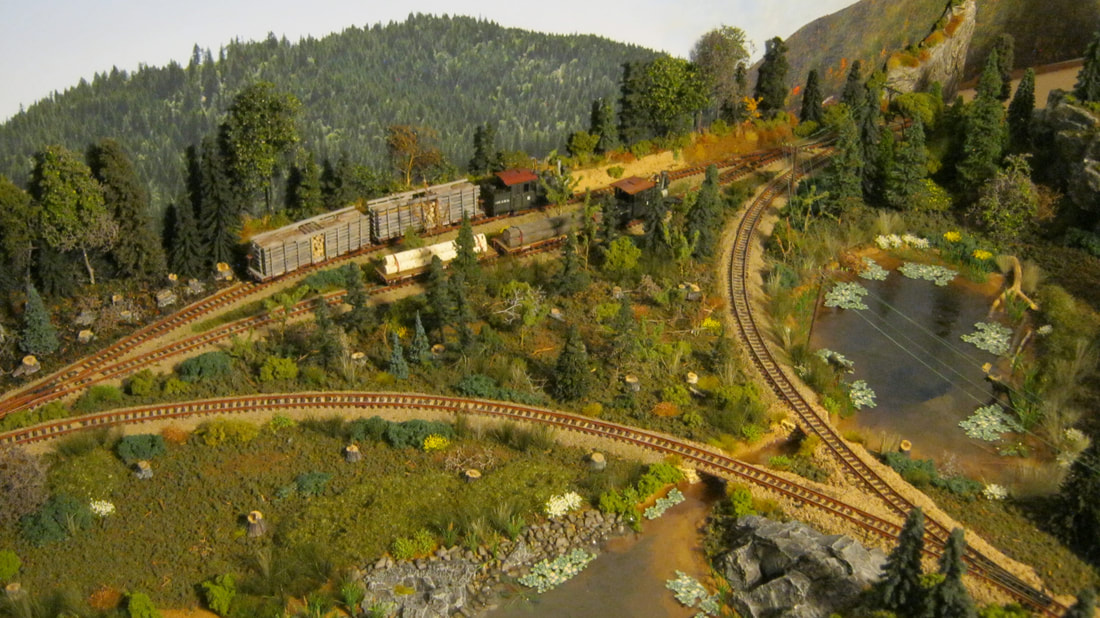 Above is the completed Eustis Junction module.  Two trains have met up to put together a consist that will be heading out of the junction on the track leading off in the upper right of the photo that goes down Sluice Hill.  The pulp racks have come from
Greene's Farm, pulled by #8 and two flats with 'long lumber' logs pulled by #1 from Langtown.  Haley Pond is at the bottom of the photo, and the small pond to the right, I call Moose Pond. 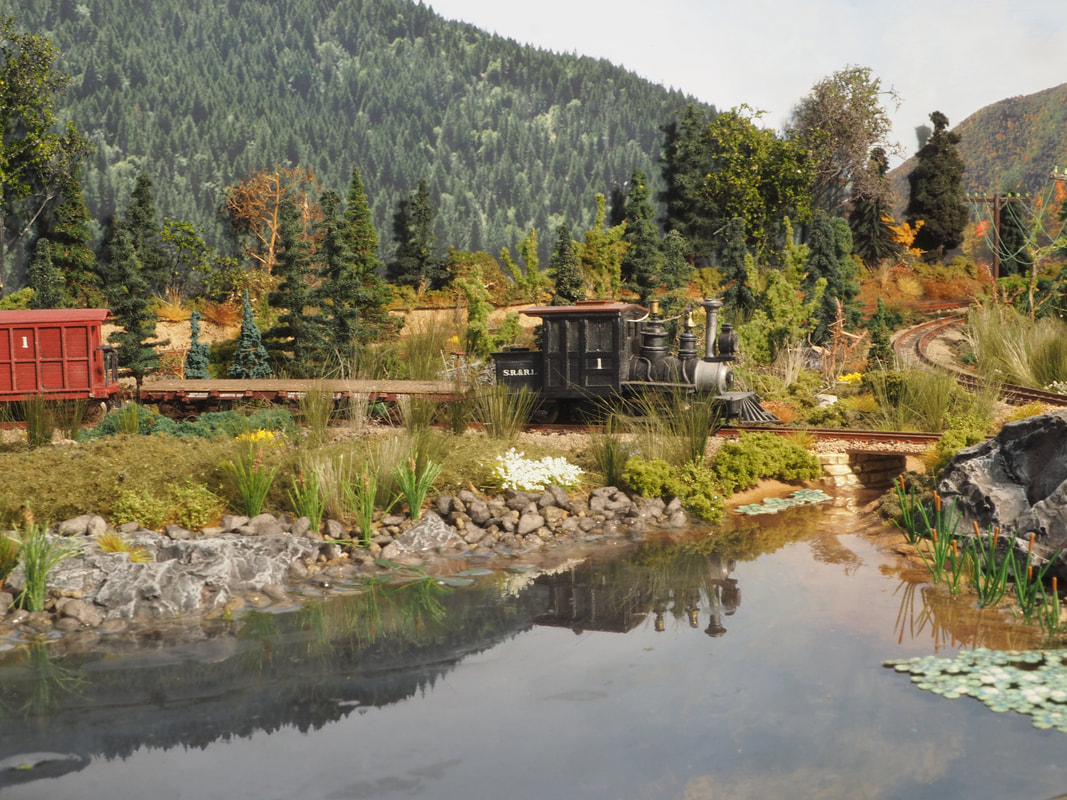 The same scene as above, but viewed from the edge of Haley Pond. 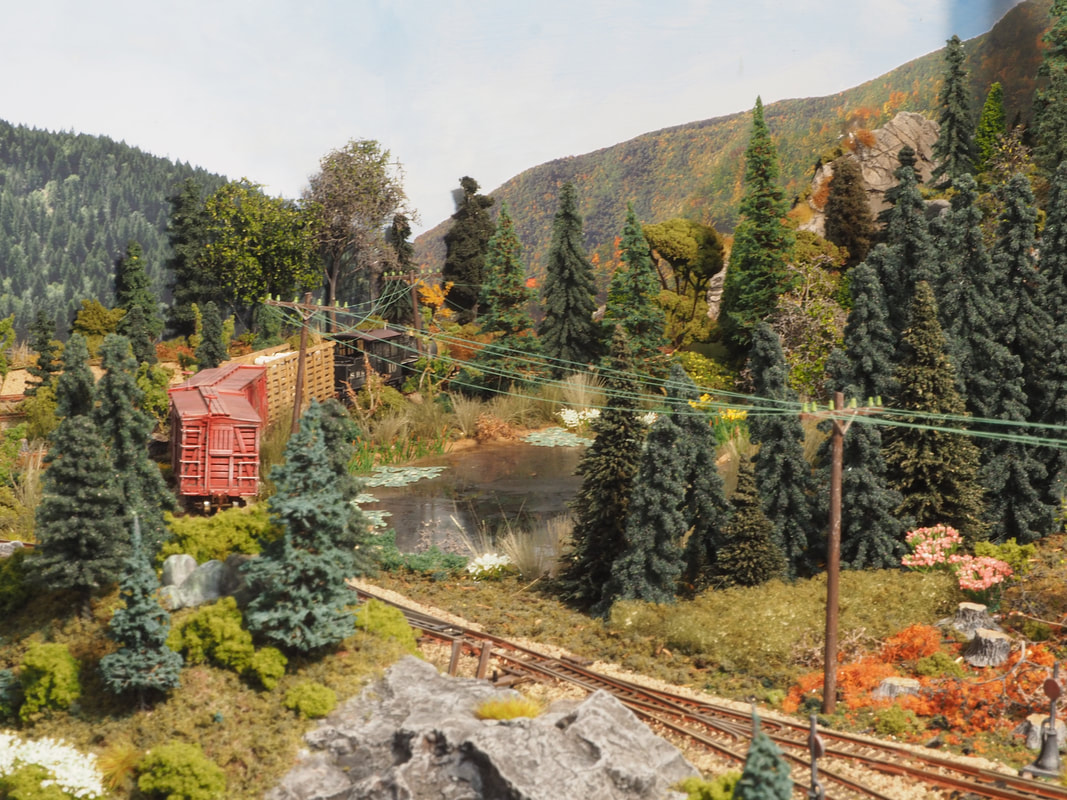 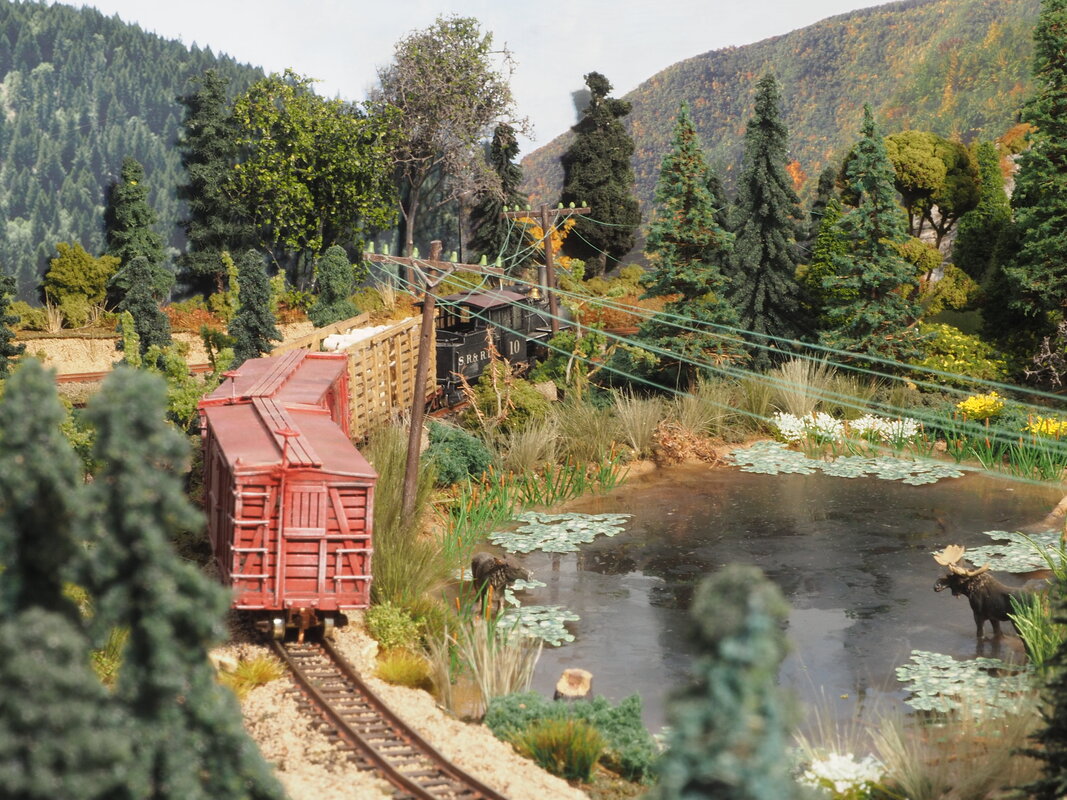 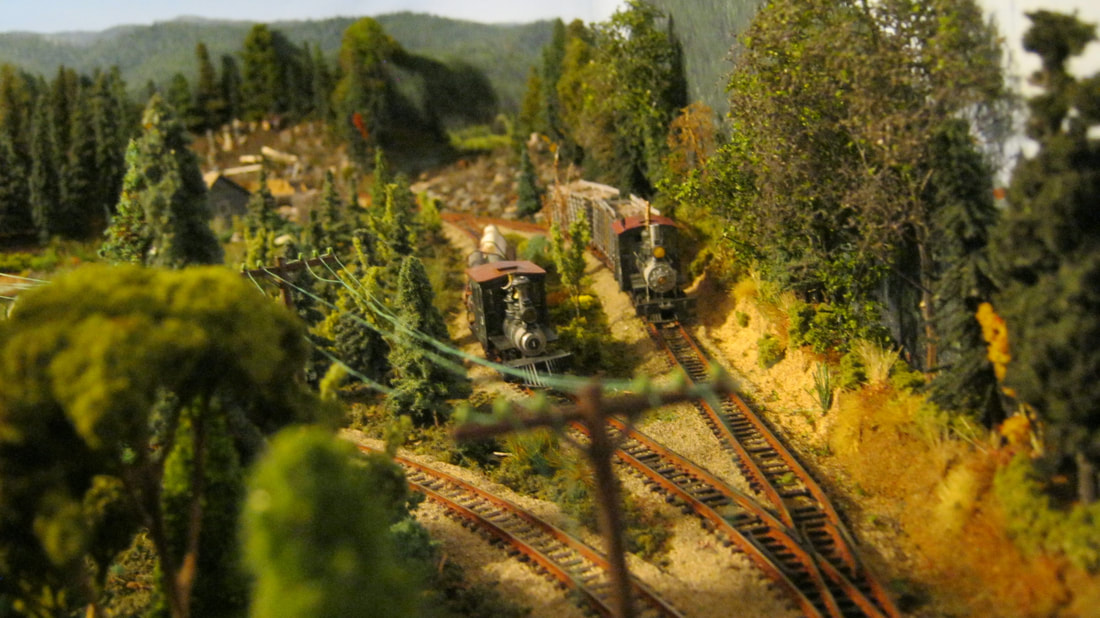 Also the same scene but viewed from the direction of Sluice Hill. 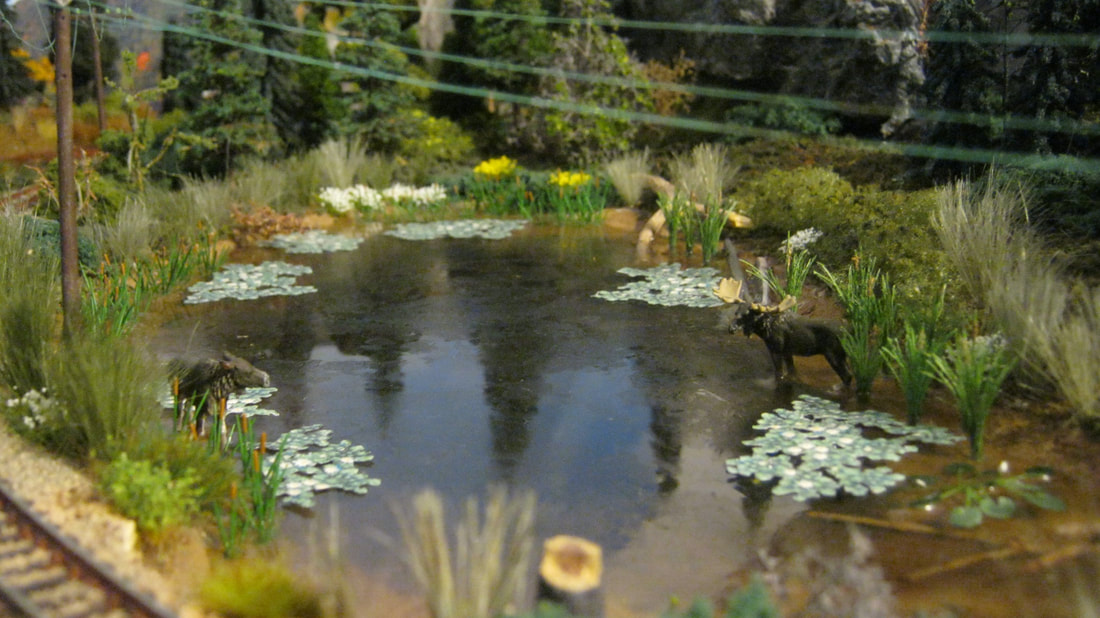 Moose Pond from up close.  Miss Moose on the left and Mr. Moose on the right are viewing each other with love on their minds. 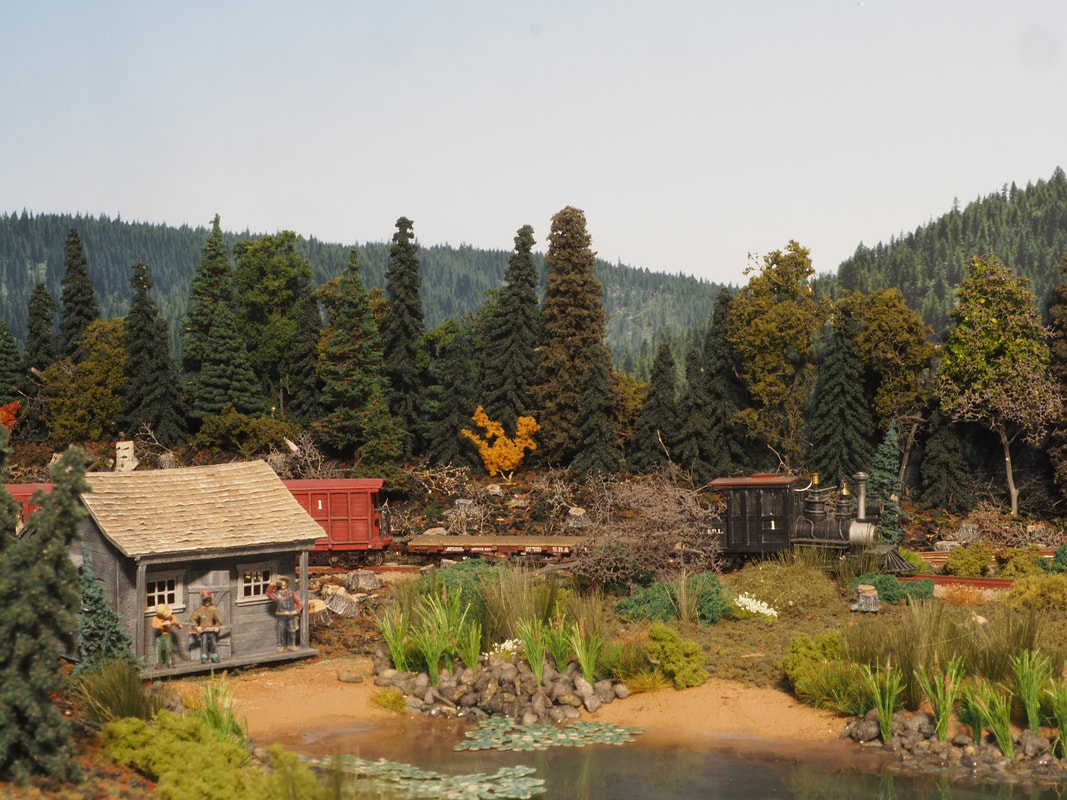 A hunting cabin on the edge of Haley Pond.  Tourism and sporting were big business in the Rangeley area at the turn of the 20th Century.  They were referred to as "rusticators" by the locals. 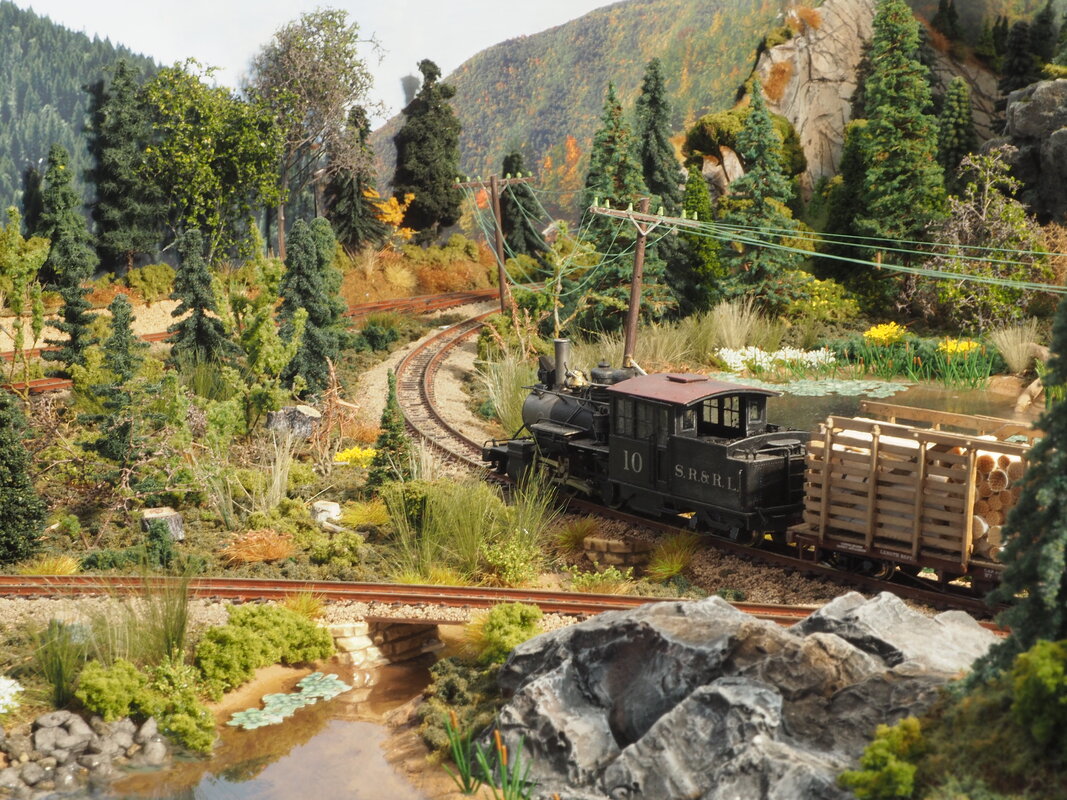 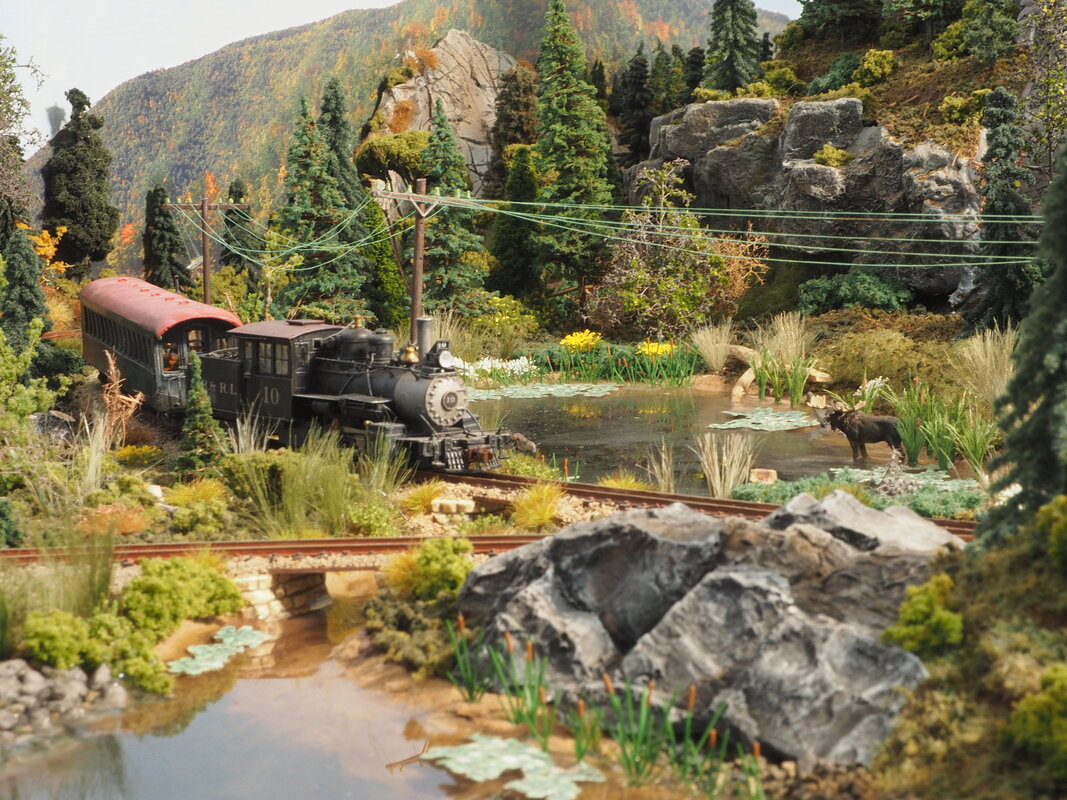 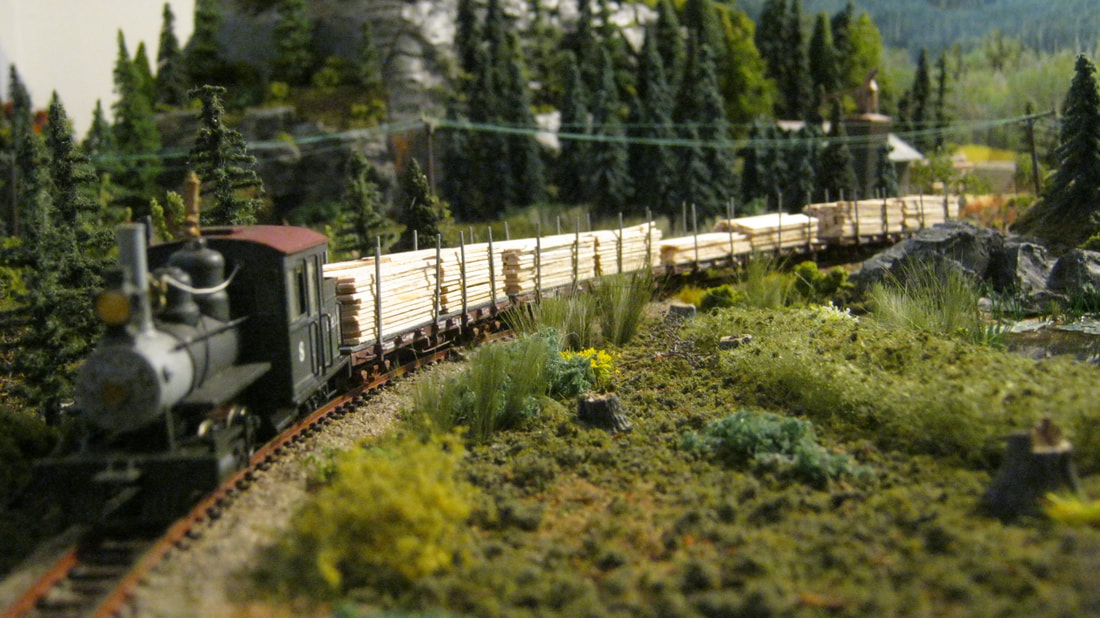 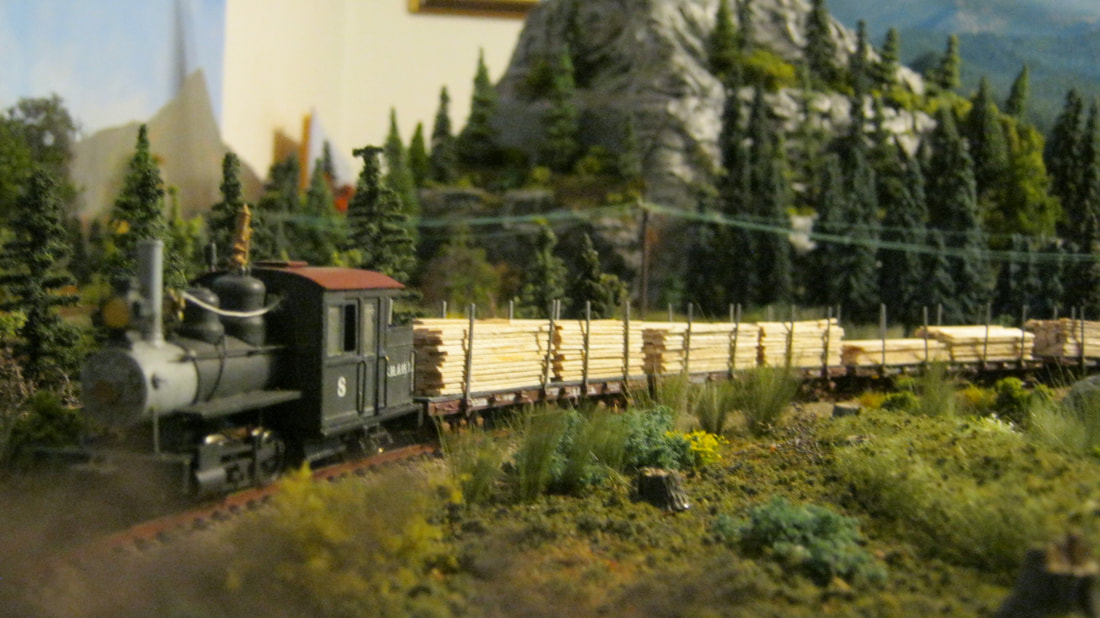 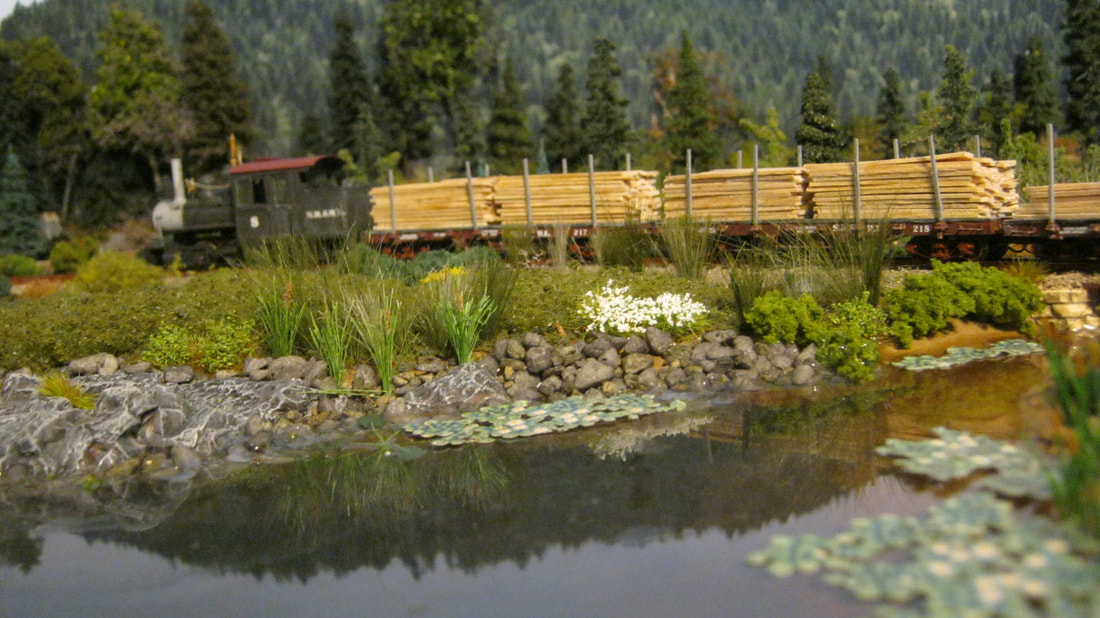 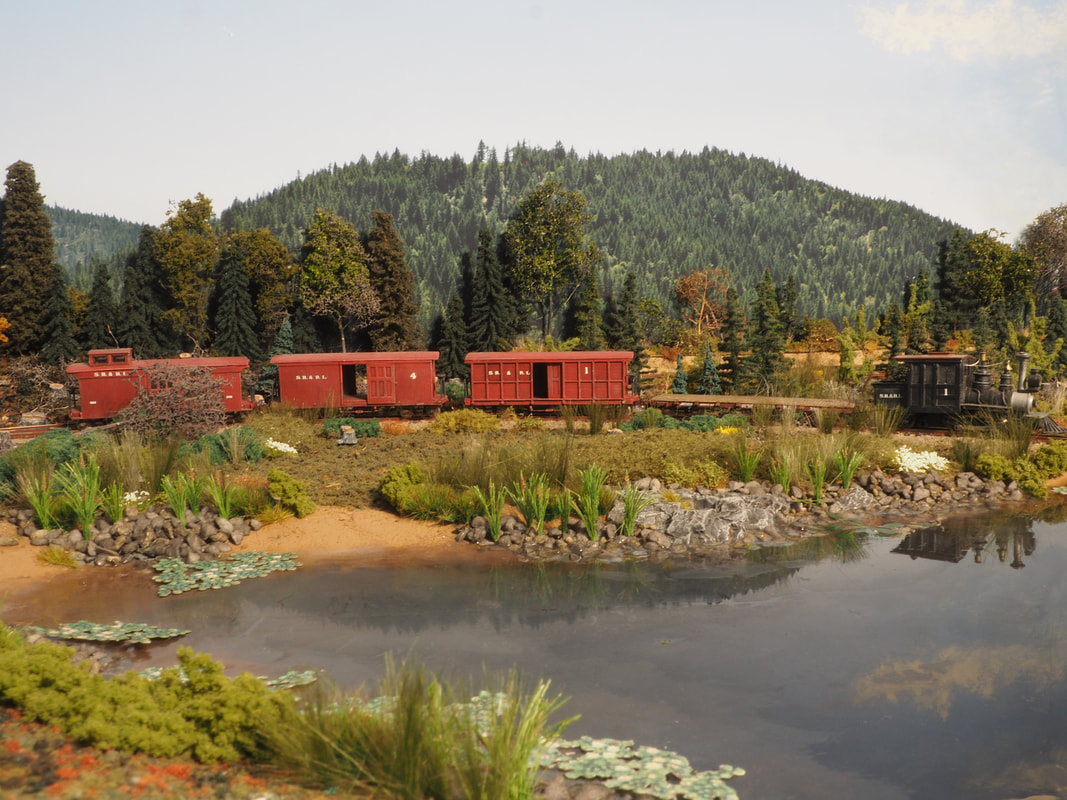 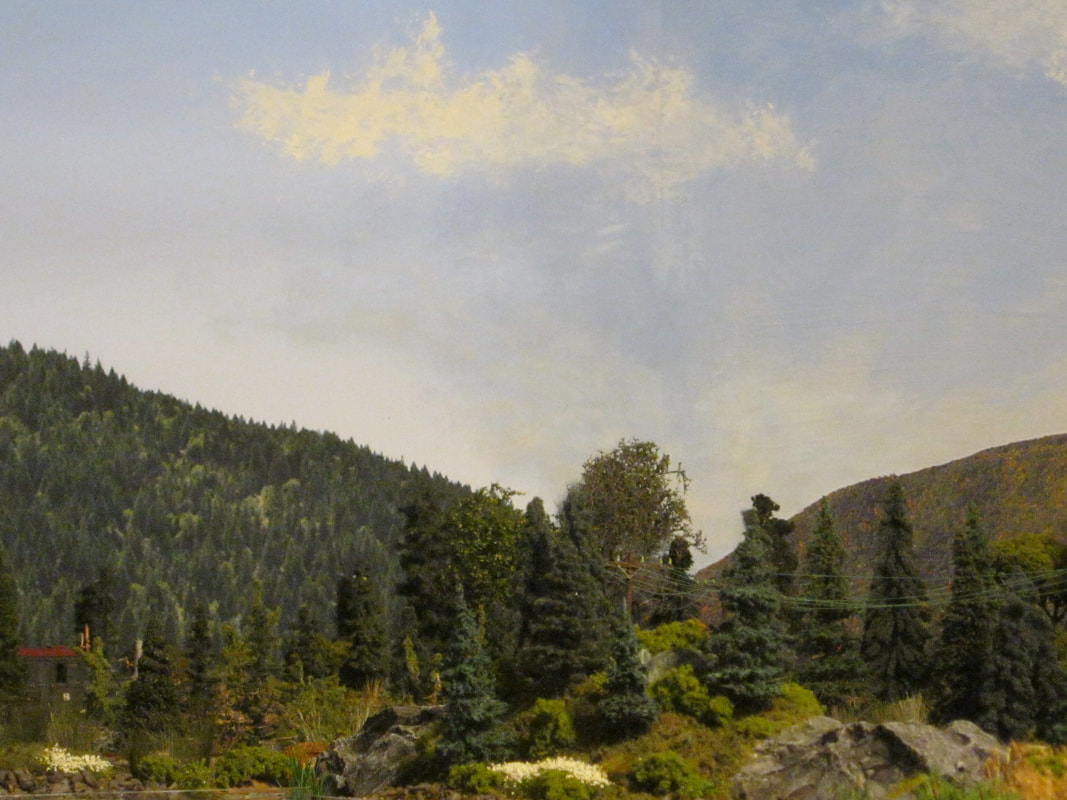