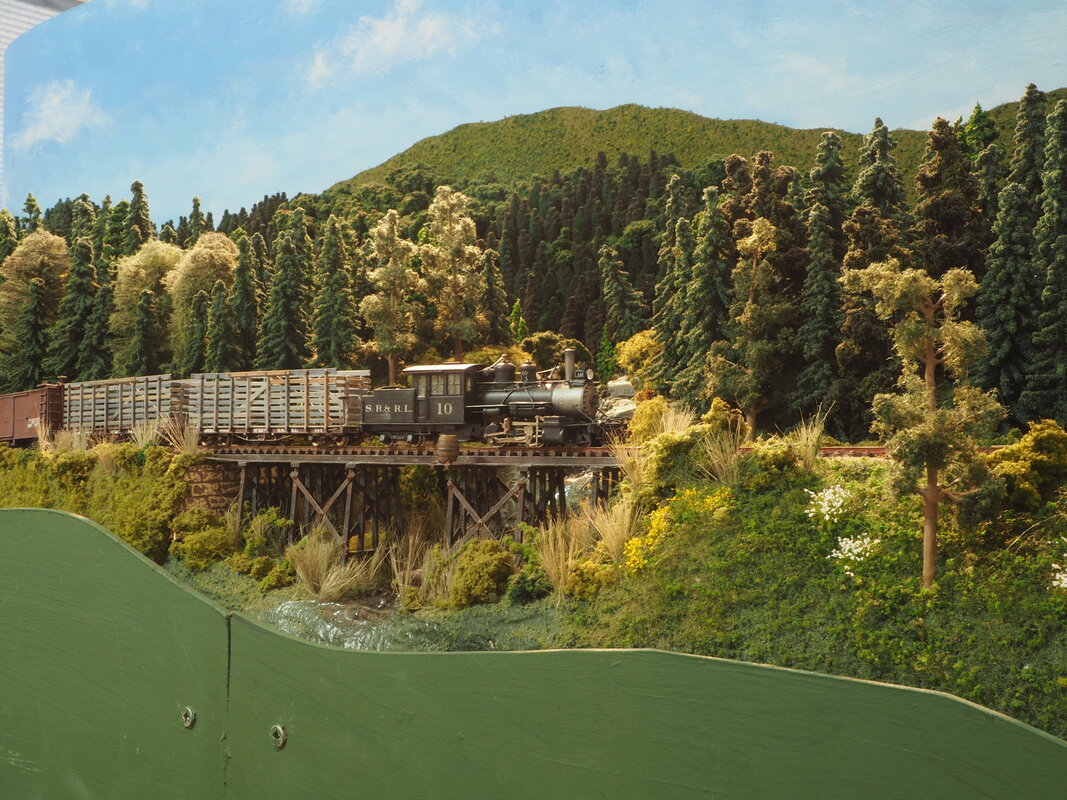 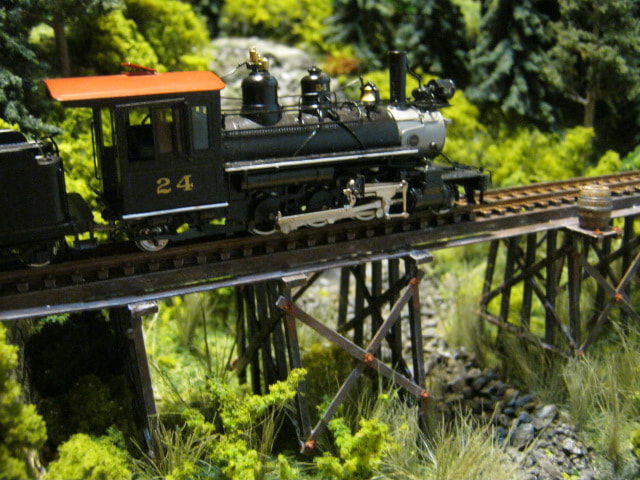 The final touches were adding a buck and doe into the stream bed below the trestle, and finishing filling the stream with Realistic Water, so the deer look like they're knee-deep in the stream.
The Sluice Hill module is now ready to be added into the bigger layout, with SR&RL prairie #24 hauling a freight up the grade. 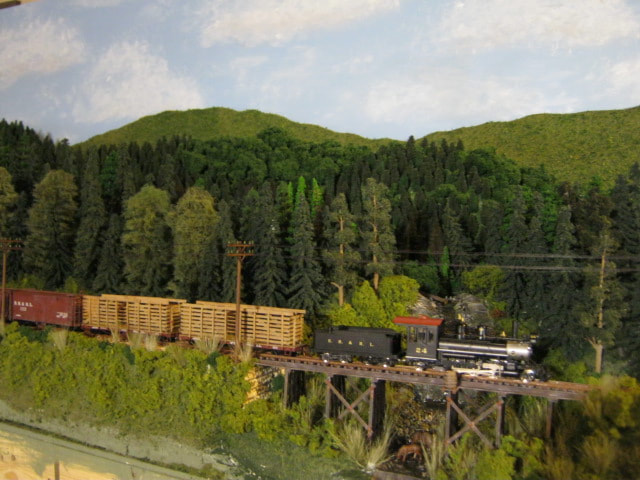 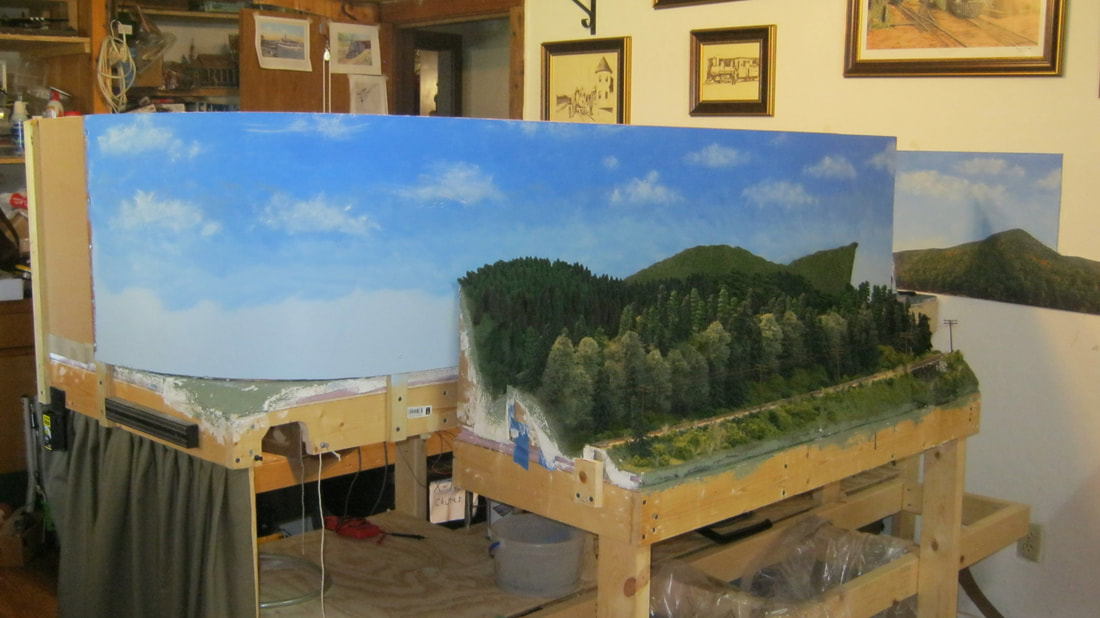 Above, you will see that I have now gotten ready to extend the track from Eustis Junction around the curve  to the Sluice Hill module, which is a constant 3% grade down around another curve under the Rangeley model, continuing its 3% grade out from under Rangeley and onto the Reed's Station module.  To give the curves a slightly better (bigger) radius, I put 1.5" spacer blocks of scrap wood between the back of Rangeley and the back of Sluice hill.  I cut a full length 8' x 18" strip of Masonite, attached it and bent it around the back of the Rangeley backdrop, and painted the sky.  I painted it two coats of light blue, then started at the top with a medium blue, adding light blue to the medium on the pallet as I blended the sky downward with a sea sponge.  I then measured out the track radius on paper, and checked it out full size on the layout for the wooden ramp with track that would connect the whole thing up under the table.
Above left is the joint between Eustis Junction behind the scenery in the upper center of the photo and Sluice Hill to the left of the photo.  You can see the cutout in the benchwork where the grade will exit under Rangeley and continue to the lower right of the photo onto the Eustis module.  The upper right photo shows where the ramp will leave Sluice Hill and disappear under the Rangeley benchwork.
Above left are the cutouts in the benchwork under Rangeley.  The push pins on both sides of the cutouts with the string hanging down are there to support the ramp, and adjust it at each point through the frames, until the ramp is at a true 3% grade before permanently bolting it into place.  To the upper right is the completed ramp.
Below is the trackwork for the hidden track going down the ramp under Rangeley.  To the lower left, you can see where I have soldered the power leads onto the track, and soldered leads connecting the rails at all the joints.  I didn't solder the rails together to allow for expansion, with the leads ensuring good electrical contact between rails.  None of this will be seen, so there is no effort to hide any of the leads.  I laid cork roadbed to ensure a nice quiet ride under the layout.  The lower center and right photos are the ends of the ramp that come out from under Rangeley to connect to Reed's Station and Sluice Hill.  I left extra track extending off the ramp at each end that is not glued down to ensure an easy job mating up the rails with the other modules. 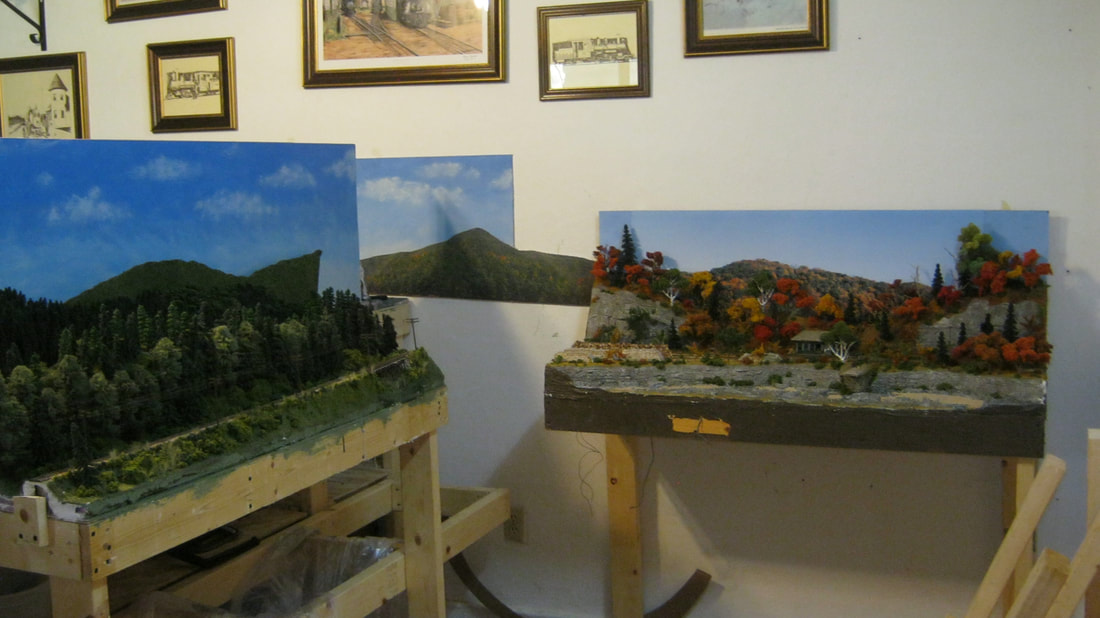 Above shows Sluice Hill permanently bolted in and ready for the ramp and extensions to the other modules ready to be built.  The Reeds Station module is to the right, and is free standing for now.  That way I can move it out of the way while working on the corner scenery between Eustis Junction and Sluice Hill, then move it back in and permanently bolt it in place to finish up the linkup with the track coming out from under Rangeley.  The scenery in that corner will consist of a wooden trestle crossing over the Reeds Station track below, with the foliage beginning the transition to Fall.  The scenery to the left of Sluice Hill will be a continuation of the same style of forest that is on Sluice Hill.  These are the only two areas on the layout where something blatantly not on the original Sandy River and Rangeley Lakes Railroad will exist.  I will try to make the end of the slope to the left of Sluice Hill disappear into the woods, with a tunnel entrance hiding behind the trees in case someone wants to get too curious where the train went.  There weren't any tunnels on the SR&RL.  There also were no trestles crossing over track below on the SR&RL, but at least it will look cool when it's done. 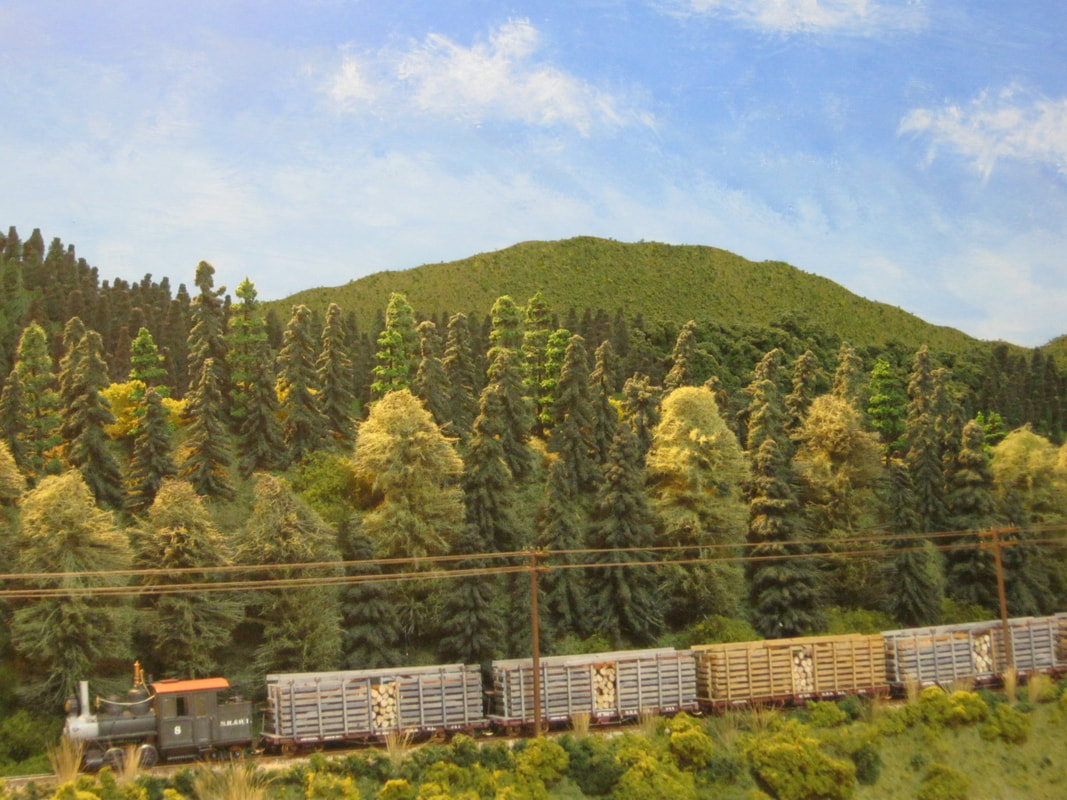 The above photo and the three below show #8 hauling a consist of five loaded pulp racks down the hill toward Phillips. 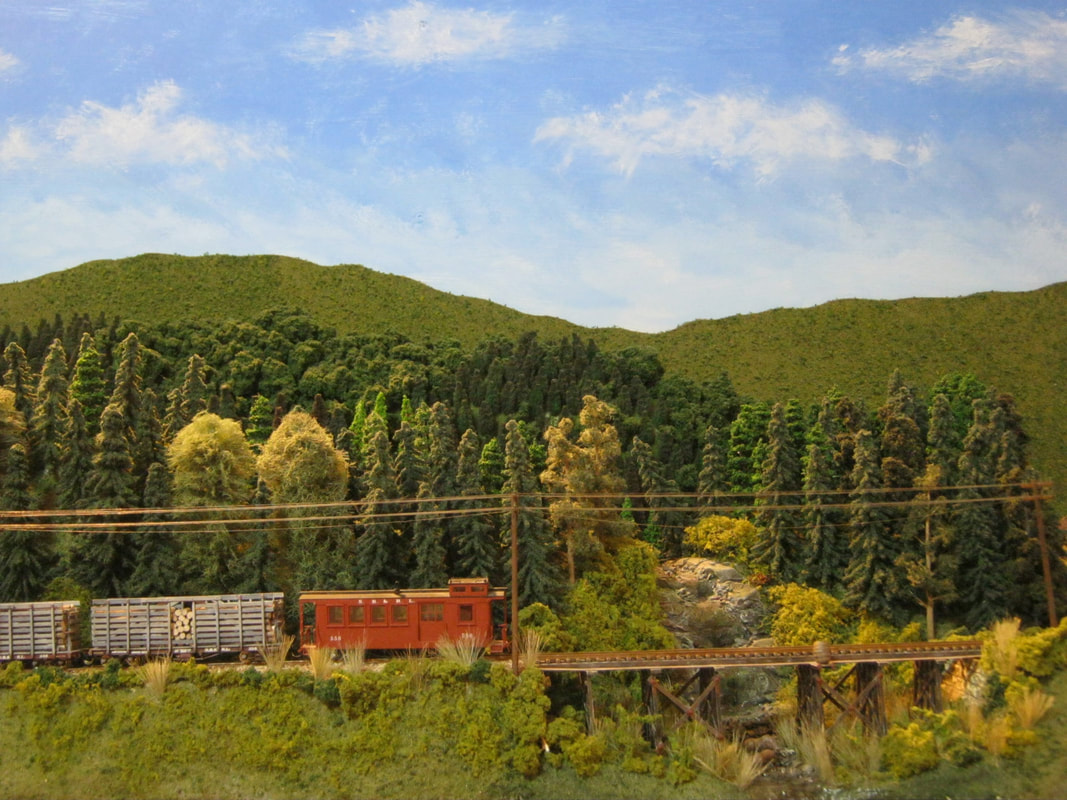 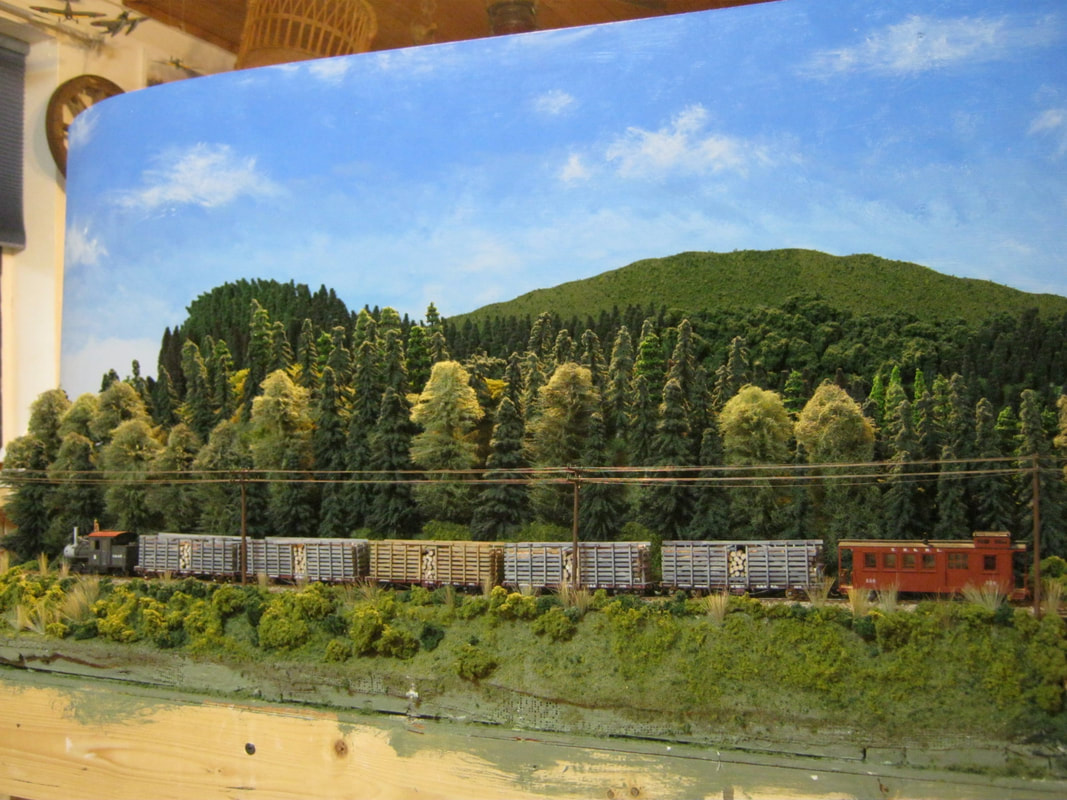 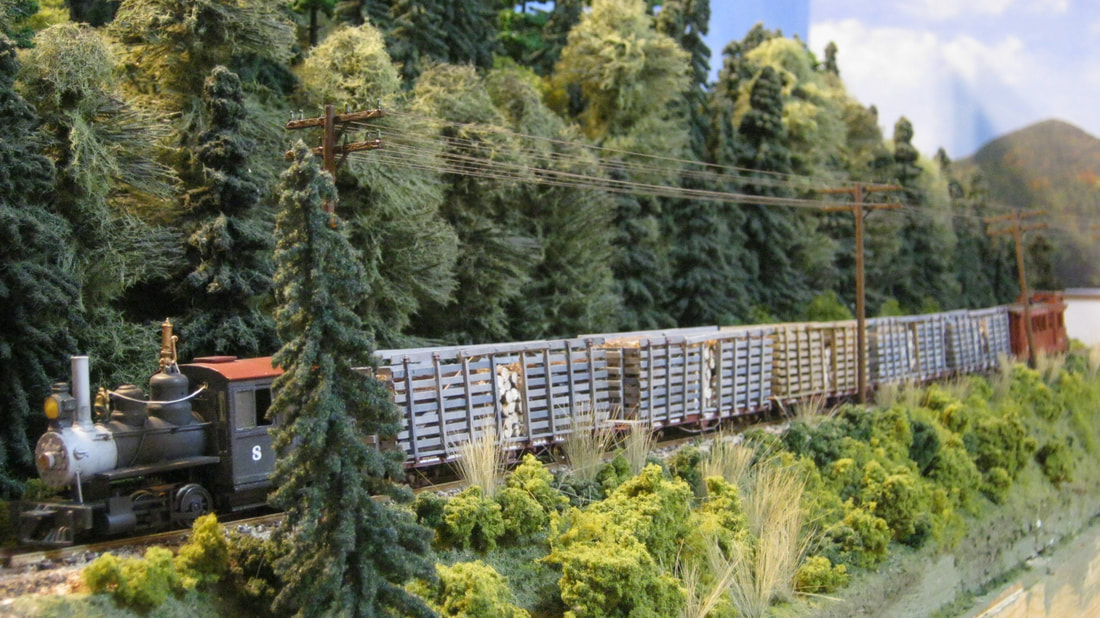 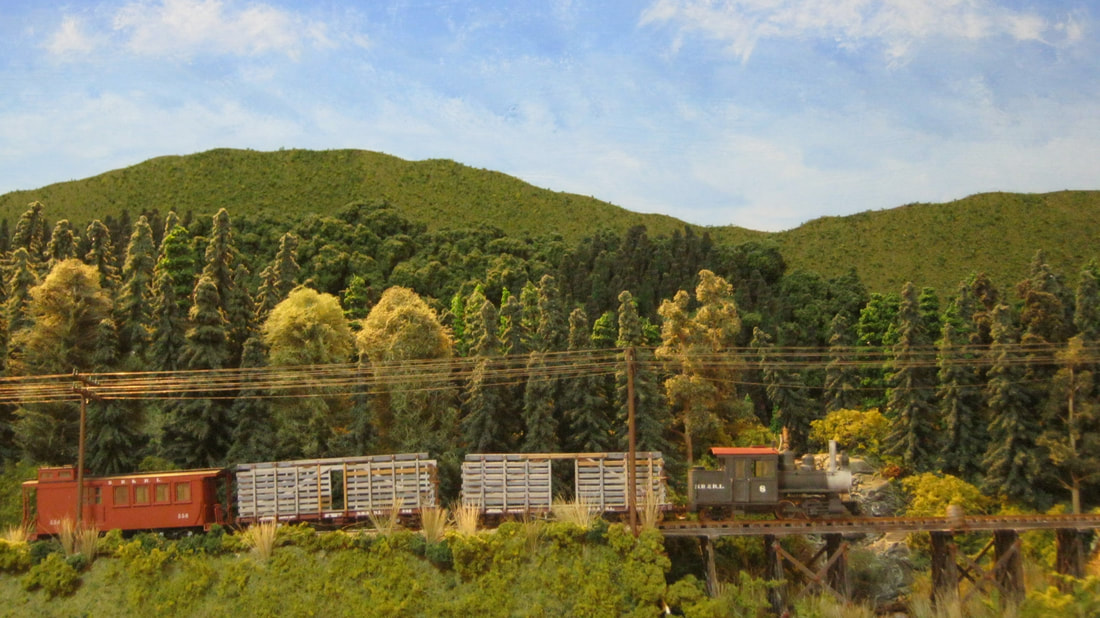 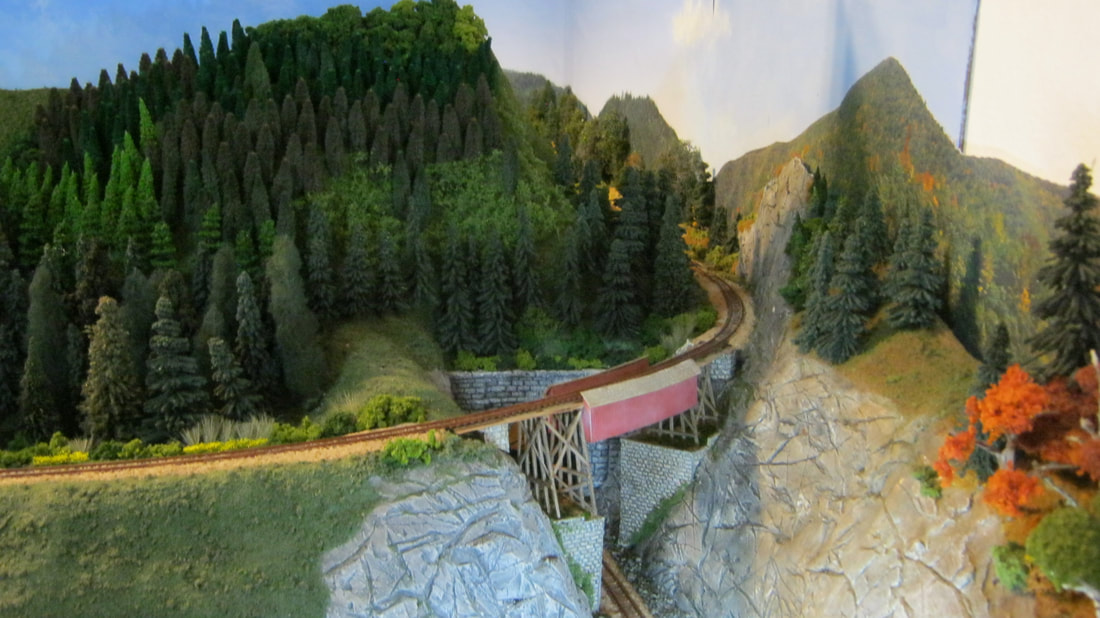 Below, the detail of the "south" end of the grade is now done, and the only thing left to do is to finish replacing the the telegraph poles with improved ones and replacing the black telegraph wires with olive-green lines, now that I know that back then the copper was bare with no insulation, and turned green from exposure. 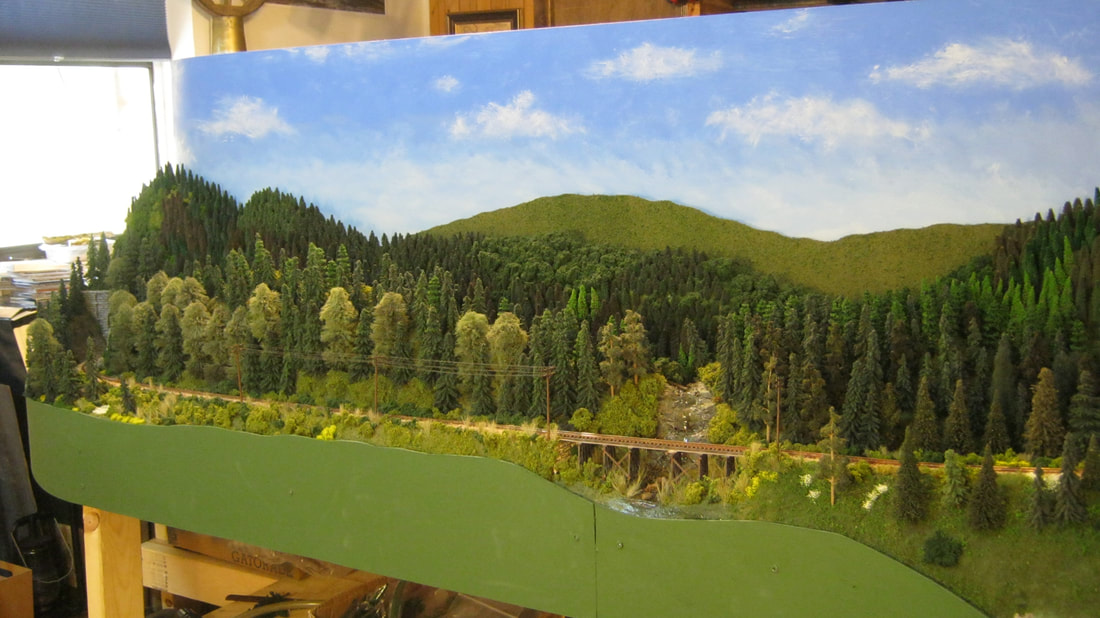 Below, the "north" end of the grade now done, minus the improved telegraph poles and lines, with scenery now blending it with the Reeds module to the right. 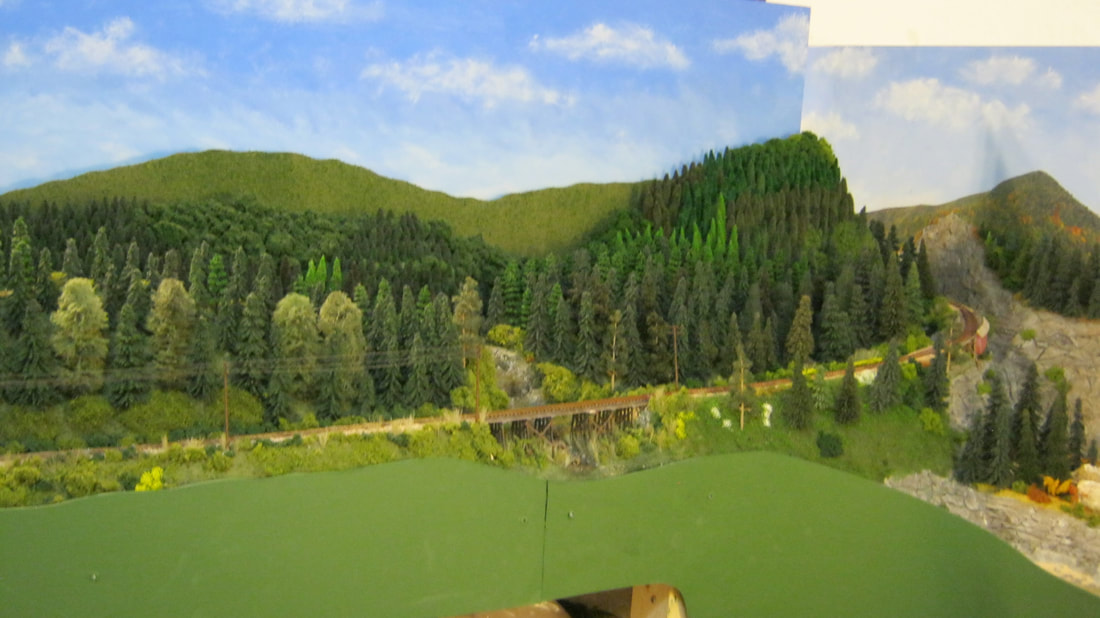 Below, the finished pass through the hills to Eustis Junction beyond.  Since there was no spot on the actual railroad that had track crossing over itself like I had to do on the layout, this spot is "freelanced".  Since it is freelance, I've named it "Grafton Notch", one of my favorite places from my youth, with "Old Spec Mountain" to the left, and "Table Rock" to the right. 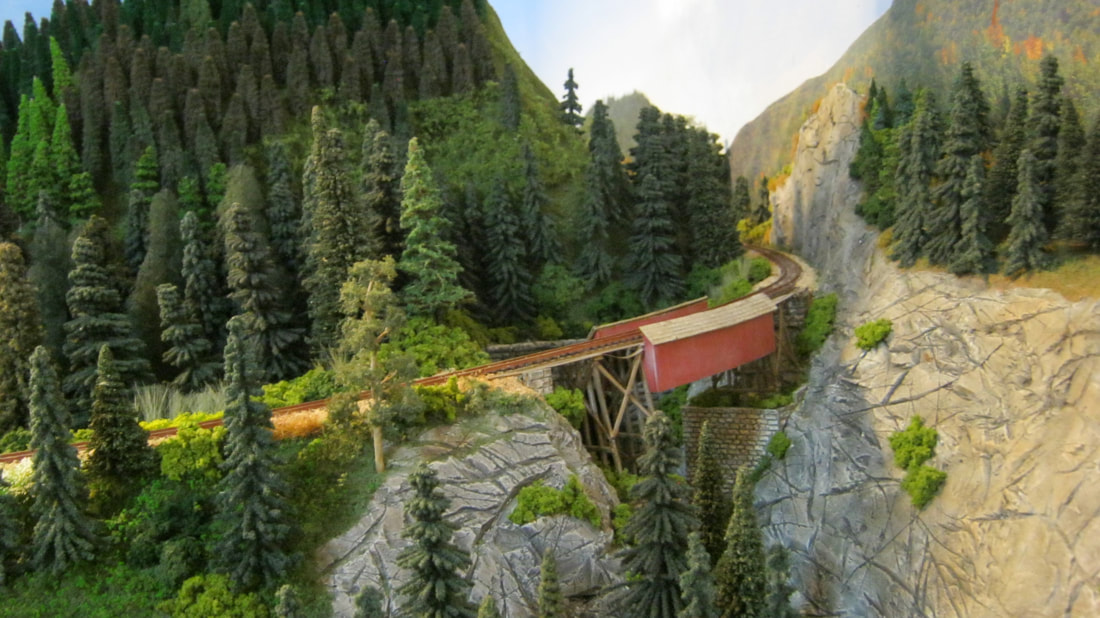 Below, the valance is now in place to pretty it up and hide the shelving below, and the first train to run down the now complete mainline between Eustis Junction and Reeds, is the Rangeley Express, being pulled by SR&RL #10. 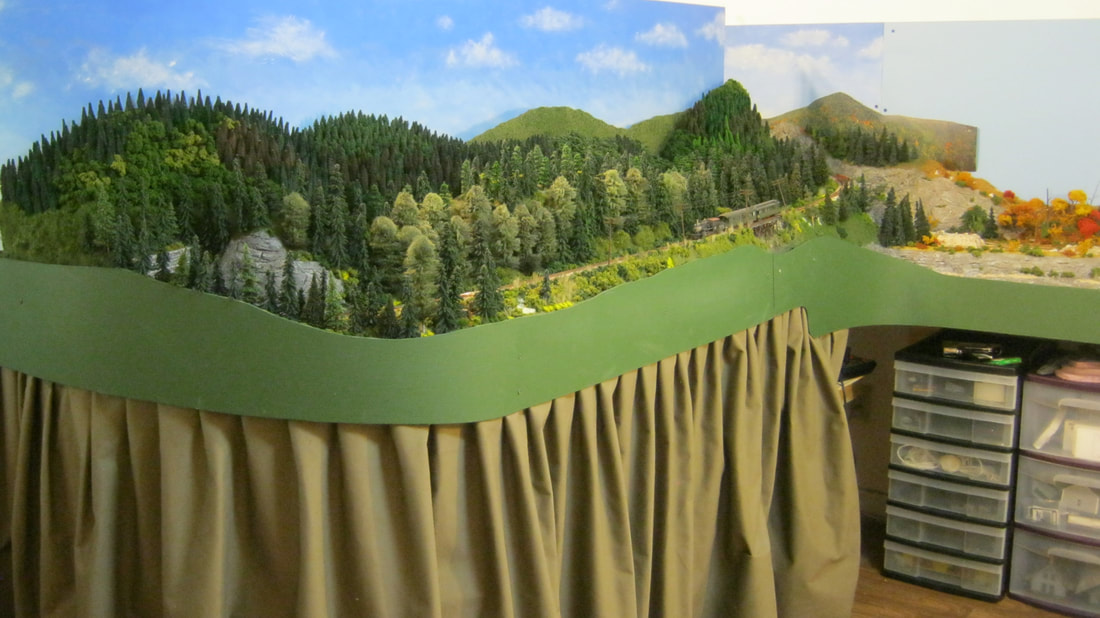 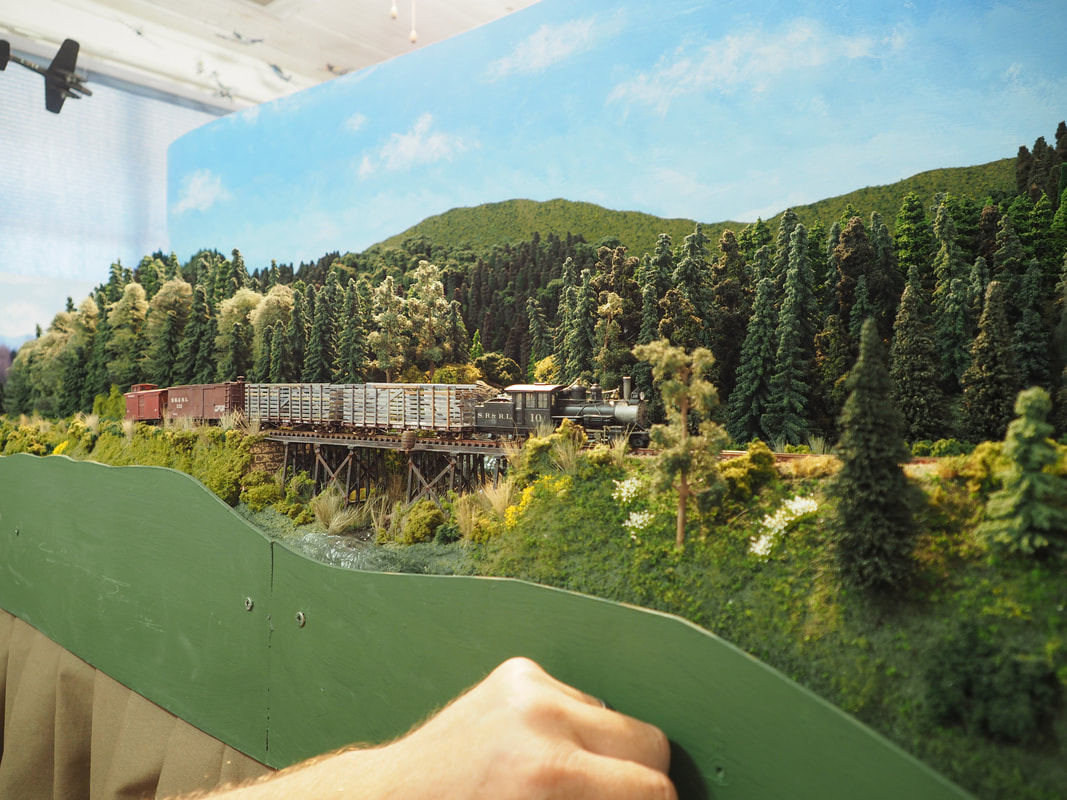