In the model railroading world, there are two types of layout: freelance and prototype.
In a freelance layout, everything is fictional, and in a prototype layout, everything is based on a current or past railroad, and is made as true to the real railroad as possible.  Then there is the gray area in between, a freelance fictional railroad based on a real prototype, or "freelance prototype".
The Franklin and Bath is such a layout.  Historically, there was the Sandy River and Rangely Lakes Railroad that terminated at Farmington, Maine, and the Wiscasset, Waterville and Farmington Railroad that terminated at Winslow (it never made it all the way to Farmington).  Enterprising individuals that wanted to see the two finally linked together eventually chartered the Franklin, Somerset and Kennebec Railroad, named after the three counties it would traverse on its mainline.  Roadbed was laid, trestles were built, and materials gathered, and the only hold-up was permission to cross the Maine Central Railroad tracks so that laying rail could commence.  Permission was finally granted by the state, with the provision that construction could not interfere with operations on the Maine Central while the crossing was constructed.  The day came, and the workers showed up to the site, and go figure, every time they picked up their tools, a Maine Central Train came into sight steaming down the tracks.  And so it went on, until the the FS&K, already taxing its finances and time to the limit, collapsed, with no pity rendered by the Maine Central Railroad in its demise.  There were other contributing problems, such as the Sandy River and Rangeley Lakes Railroad having no desire for the FS&K to tie into its line at Farmington, but the track crossing issue was the straw that broke the camel's back.
Sooooo......anyway, the basis of this fictional layout based on some real history, is that the FS&K did get built, the Maine Central did allow it to cross its tracks, linking the SR&RL with the WW&F, and as soon as that happened and profit was realized, the Maine Central conducted a hostile takeover and swallowed up the entire narrow gauge network from Rangeley all the way to Wiscasset.  To increase its profits further, it extended the line from Wiscasset to Bath, so that lumber cut in Franklin County for the shipyards in Bath could be delivered straight to the shipyards without trans-shipping lumber to the standard gauge in Wiscasset.
The reason all this history took place is because I want to model the shipyards in Bath and supply them with narrow gauge rail service.  This is my world: so let it be written, so let it be done.  The Franklin and Bath will occupy a separate room from my Sandy River & Rangeley Lakes RR layout.  The wall dividing the two rooms is made of cinder block, so for now, the plan is for trains leaving Farmington to disappear to an under-the-layout fiddle yard, with a track leading onto a sort of "tray", that can be lifted out and carried to a fiddle yard track in the other room, laid in place, and the train continues its journey off of the tray and on its way to Waterville. 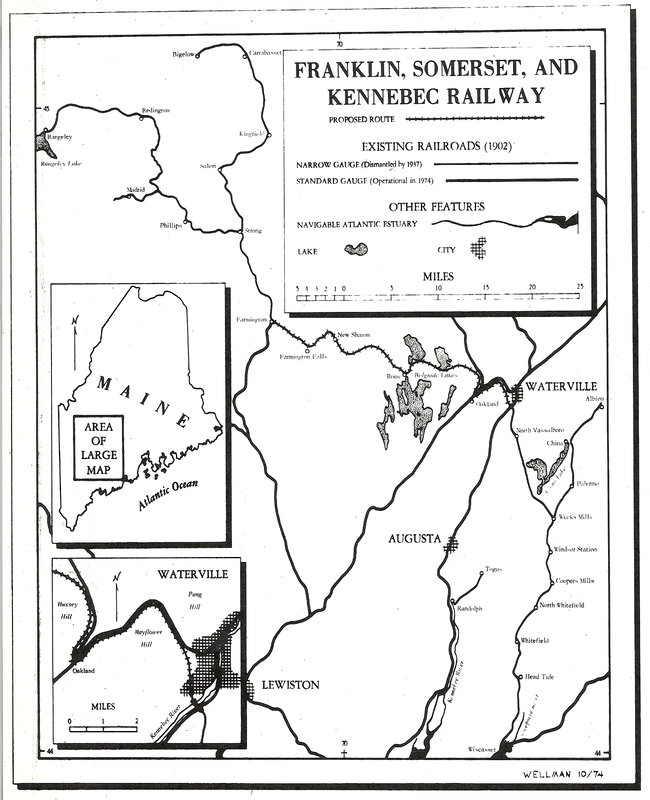 After leaving the junction with the Sandy River & Rangeley Lakes Railroad at Farmington, the major feature along the Franklin, Somerset and Kennebec Railroad on the way to the link-up with the Wiscasset, Waterville and Farmington Railroad was the town of Waterville.  Waterville was the location of the main shops of the Maine Central Railroad, along with several fabric mills and other industries.  To link up with the WW&F, the FS&K had to cross the Kennebec River at Waterville, a major bridging requirement to get to the junction with the WW&F at Winslow, across the river.  The FS&K portion of the Franklin and Bath will be represented -it is intended- by a mainline from Farmington that runs to Waterville.  Waterville will be represented by modeling the Maine Central RR yard and shops, but will be servicing the Franklin and Bath narrow gauge instead.
There will be mills represented on the west bank of the river, trestle bridging across the river, and the RR station and houses on the east bank where the rails of the FS&K link up with those of the WW&F. 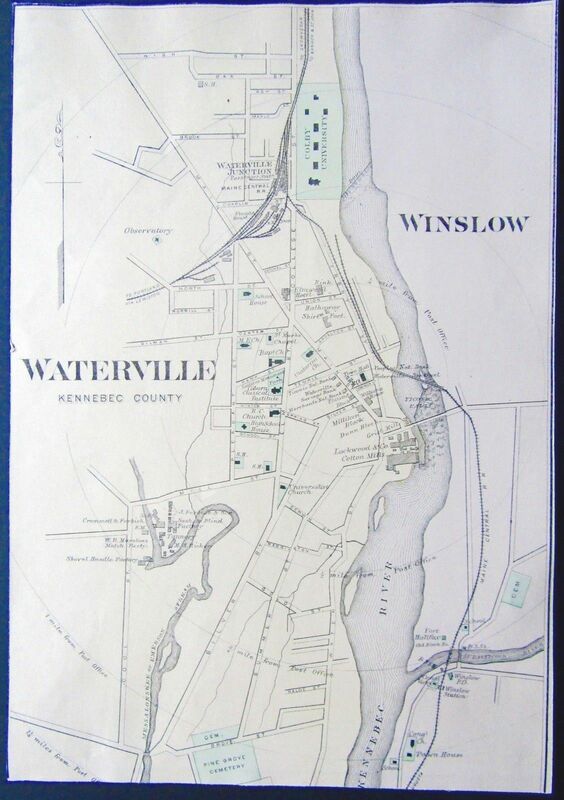 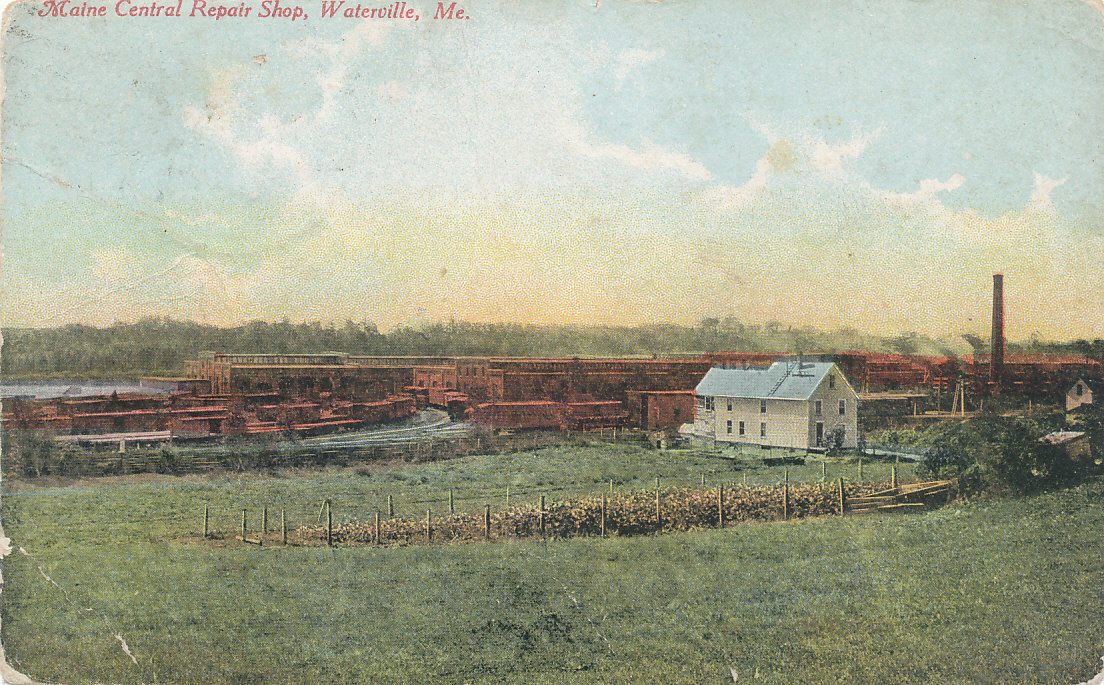 Above:  The railroad repair shops at Waterville. 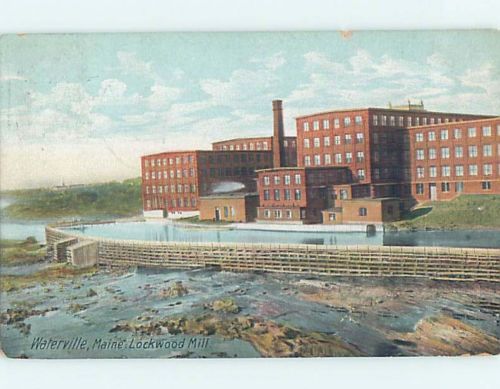 Above:  The Lockwood Cotton Mill at Waterville, Maine.

Above:  The railroad bridge across the Kennebec at Waterville.

Togus, now the Veterans' Hospital for the State of Maine, originally started before the Civil War as a health spa venture, centered on a natural spring touted for it's healing properties.  The Civil War curtailed civilian activities for things like spa vacations, and facing economic failure, the owner of the spa sold it to the federal government during the war for use as a hospital for wounded soldiers.  After the war ended, Togus became the first U.S. Soldiers' Home for disabled veterans, largely self-supporting, with the veterans themselves farming, tending to livestock, learning and employing carpentry and building trades, etc.  The facilities grew to include recreation halls with billiards and other games, library, theater for plays and concerts, fishing pond, deer park, baseball, and other pastimes.  Togus became a destination on weekends and holidays for civilians, who rode the Kennebec Central railroad from Randolph to enjoy band concerts and ball games and holiday celebrations and whatnot.
The Kennebec Central Railroad was built to service Togus, connecting it to the outside world at Randolph on the Kennebec River, where coal from barges was unloaded into a huge coal facility to be transported to Togus, and other supplies were transferred onto the railroad for Togus as well.  The Kennebec Central was also the transportation that saw a large traffic for veterans who spent a lot of time in Randolph, and Gardner across the river, enjoying shopping, dining, and of course drinking.
Togus will be represented by the buildings located along the tracks at the terminal, where the commissary and coal bunkers were located.
I have a personal connection to Togus, as my Dad was a disabled vet, and spent his last years there and died in the Nursing home building when I was a kid.
Above left is the terminal of the KCRR at Togus.  There was no formal depot, so loading and unloading took place at the commissary building that also housed a restaurant.  Above right is a typical street in Togus (Togus Avenue) showing the attractive atmosphere of the facility and several veterans going about their day.  Below left is the Togus Opera House, which also served as a theater.  Notice the cannons and limbers adorning the grounds.  Below right is an outdoor concert being held at Togus in 1905. 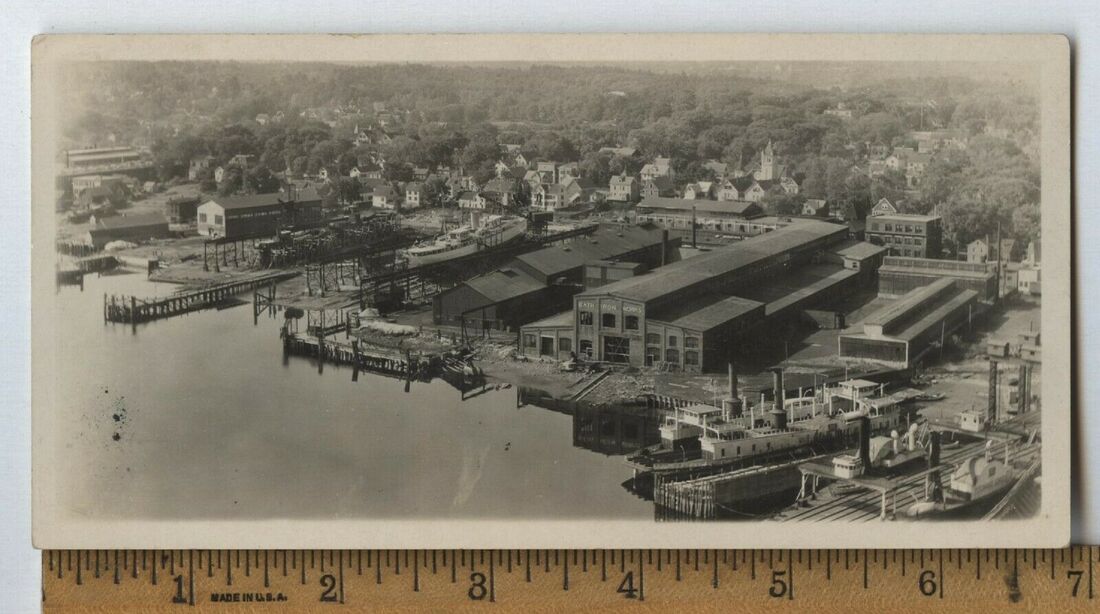 Bath will be the largest module on the Franklin and Bath Railroad layout.  Above is a photo of Bath Iron Works and the Maine Central Railroad car ferries and loading aprons on the right.  The MEC rail yard and depot were just to the right of this photo.  The Ferry to the left of the apron is the Hercules, which was replaced by the larger ferry Ferdinando Gorges, which is docked at the apron.  Bath Iron Works survived the transition from wooden sailing vessels to iron and steel steam powered vessels, and is pumping out the most modern Navy destroyers to this day.  If I hadn't gone into the Army, I would have ended up working at Bath Iron Works as a welder. The pay was great for Maine, and Ronald Reagan had just authorized the 600 ship navy.  BIW was recruiting every kid out of high school with welding experience that they could get.
The Bath module will be a compressed version of Bath, with the left (south) end of the module ending at the mouth of the Kennebec River, light house and all, continuing up river past the Percy and Small shipyard, still producing wooden schooners for the coal trade, past Bath Iron Works and the railroad ferry and yard, up Long Reach to the coal and oil tank farms, commercial wharfs, and ending at the Eastern Steamship wharf and facilities.  All the original standard gauge rails and facilities of the MEC serving the city will instead by HOn30 rails and facilities of the Franklin and Bath railroad.  An HOn30 smaller version of the ferry Hercules will replace the standard gauge one, and will connect Bath trains with the ferry terminal at Woolwich on the layout module across the aisle/Kennebec River.
The waterfront facilities and shipping at Bath will provide the Franklin & Bath Railroad with unlimited possibilities for freight train consists, loaded with everything a major deep water port offered. 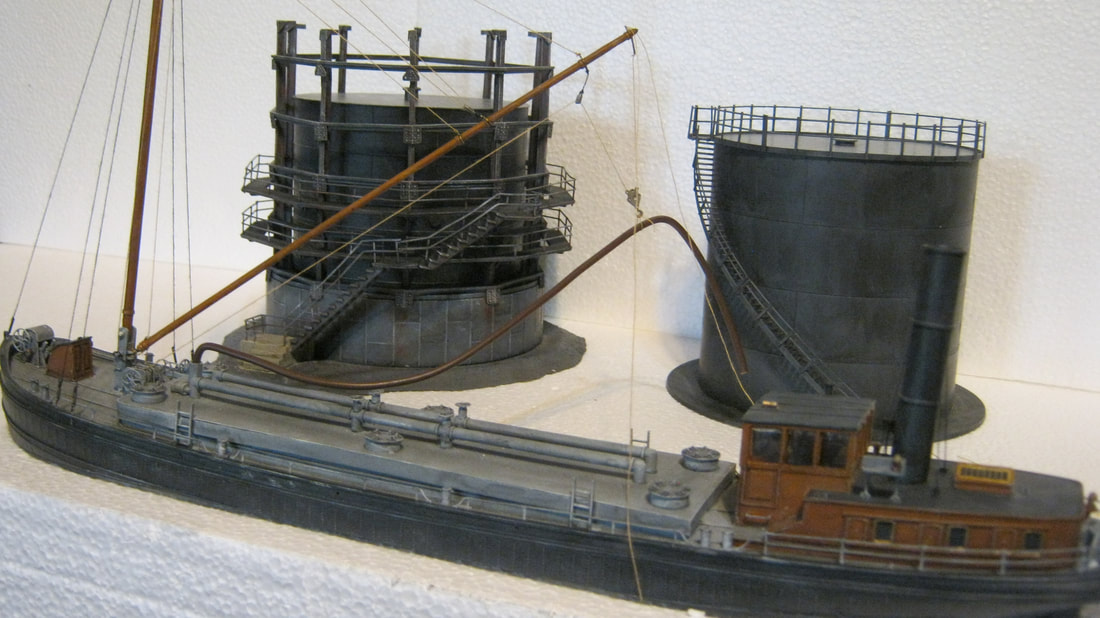